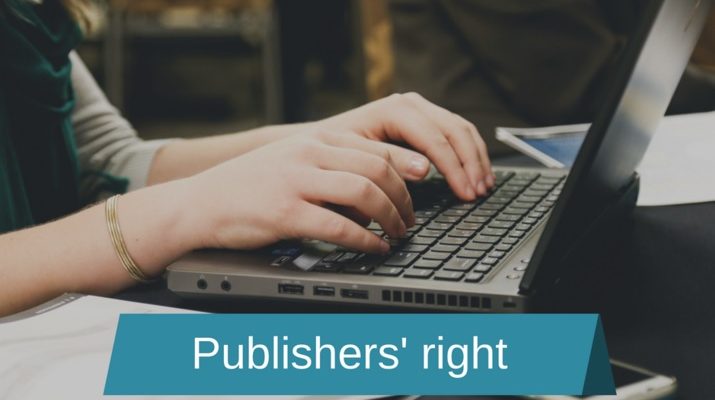 Article 11, as proposed by Legal Affairs Committee on 20 June, represent a major step in the debate: the recognition of the need to protect investment in content, to make copyright management fit for the digital world, to secure fair practices in the online exploitation of news content and to ensure a healthy, democratic, diverse, sustainable and free democratic press to the benefit of European journalists, citizens and European democracy.

The proposal also ensures that hyperlinks are clearly excluded from the scope of Article 11, and does not penalise readers who share articles, since it applies only to uses by information society service providers.

In this context, the International and European Federations of Journalists agreed in early July with European news publishers on a joint approach and wording of Recital 35*, to ensure a fair share for journalists of the benefits deriving from the future publishers’ neighbouring right .

*The undersigned associations agree that to avoid misinterpretations, Recital 35 must be clarified as follows during the negotiations:

The introduction of the proposed neighbouring right in Article 11 will facilitate a thriving press ecosystem, with fair pay for journalists, including photographers and freelances, and will safeguard the quality of content.

The solution voted for in JURI represents a sensible and balanced approach that was reached after months of negotiation and compromise.

The entirety of the press ecosystem is united in support of Article 11, as proposed by the JURI Committee. Any further limitation or amendment to Article 11 would only have the unwanted effect of diluting the right, rendering it unusable – with the unfortunate outcome that both publishers and journalists would lose out.

This would benefit only the actors that have taken advantage of the current lack of legal clarity and that have been free-riding on press content for the last decade, at the expense of professional journalism and European media.

Any alternative solution, such as a presumption, is also strongly opposed by the entire ecosystem.

A publishers’ right gives press publishers a much-needed legal standing to be able to negotiate fair and workable terms of distribution of press content in the digital world; ensures a fair and proportionate distribution of revenue between publishers and journalists; and is essential in aiding the industry to secure the future of an independent, diverse and free press.

For these reasons, we ask for your support of Article 11 as proposed by the Legal Affairs Committee and strongly encourage Members of the European Parliament not to succumb to misleading claims and hostile and intimidating campaigns driven by opponents of a neighbouring right for press publishers.

We cordially invite you to contact us with further inquiries.

The European Magazine Media Association (EMMA) is the unique and complete representation of Europe’s magazine media, which is today enjoyed by millions of consumers on various platforms. EMMA represents 15,000 publishing houses, publishing 50,000 magazine titles across Europe in print and digital.

The European Newspaper Publishers’ Association (ENPA) is an international non-profit organisation representing publishers of newspaper and news media on all platforms. In a rapidly changing media environment, ENPA supports publishers with the aim of achieving a successful and sustainable future for independent news media in Europe.

News Media Europe (NME) represents the progressive news media industry in Europe – over 2200 European titles of newspapers, radio, TV and internet. NME is committed to maintaining and promoting the freedom of the press, to upholding and enhancing the freedom to publish, and to championing the news brands which are one of the most vital parts of Europe’s creative industries.