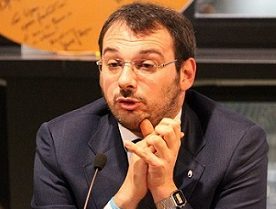 
On 28th September, the Italian court of Ragusa sentenced the aggressor of Paolo Borrometi, a 44 years old freelance investigative journalist and the president of Articolo 21, the Italian association promoting freedom of expression. Venerando Lauretta was sentenced for the death threats he made against the journalist, aggravated by the mafia method, to one year and six months imprisonment.

Lauretta, regent of the mafia clan Carbonaro-Dominante of Vittoria (Ragusa), begun to threaten Borrometi after identifying the journalist as responsible for the opening of investigations against his person.

Paolo Borrometi is the editor of anti-mafia investigative website LaSpia.it, where he reports on the Sicilian mafia activities. Due to his work, he has been intimidated many times with death threats by the local clans and thus has been forced to live under police protection for the past four years.

He filed a complaint after receiving the following threat from Lauretta: “Your heart will be placed in a pan and, after I have eaten it, I will come to visit you in Rome even though you are not even worth it of ticket’s money. Jesus Christ won’t save you and even if they arrest me, there will be people coming after you.”

The European Federation of Journalists (EFJ) joined its affiliate in Italy, The Federazione Nazionale Stampa Italiana (FNSI), in thanking Paolo Borrometi for the dignity and courage that he has demonstrated not only in his daily work as a journalist, but also as a citizen who has chosen not to be afraid of fighting the mafia.

“I think that today it’s a beautiful day for freedom of the press; the condemnation of the mafia boss Venerando Lauretta,  is the evidence that no clan and no mafia boss can remain unpunished when threatening a journalist,” said Paolo Borrometi.

He has been invited by the EFJ to speak about his life as a “embedded” freelance journalist under 24 hours police protection to the EFJ workshop “Equal Rights for Freelancers”, which will be held in Stockholm, Sweden, on the 10th and 11th of October 2018.