Demonising the media: Threats to journalists in Europe 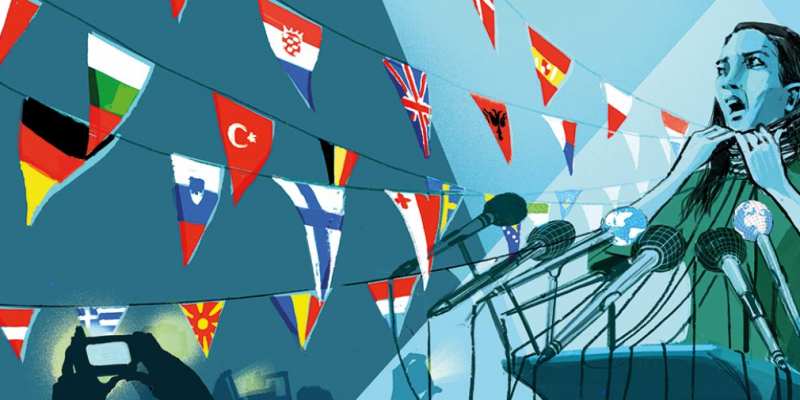 This is the landscape faced by journalists throughout Europe over the past four years.
Mapping Media Freedom, managed by Index on Censorship with the support of the EFJ, has documented media freedom incidents across Europe — over 3,000 were surveyed for this report — since May 2014. The information gathered shows journalists and media outlets targeted in a kaleidoscopic array by political leaders, businesses and the general public – but some key trends have emerged from the reports recorded and verified by the platform. This document outlines some of these, and is intended as a survey of the landscape for media freedom in the region to aid lawmakers and those who wish to help an independent, pluralistic media landscape to flourish.

Five Key trends
Five issues that have been identified from the reports submitted to Mapping Media Freedom :

Well-intentioned legislation that aims to protect the citizens and institutions of a country is, in the best-case scenario, often blind to journalism in the public interest. In the worst-case scenario, such laws are used deliberately to prevent the dissemination of information that is in the public interest. In 39 cases, reporters have been targeted for prosecution for publishing embarrassing leaked information that governments have asserted was not meant for public discussion. This is an acute issue that often involves the judicial and extrajudicial surveillance of journalists in an effort to ferret out the identities of whistleblowers.

This report identifies two key trends within this category. The first is direct interference in the operations of media outlets, either by politicians requesting editors or others involved in the production of news to alter or halt a story, or by replacing journalists critical of a particular political party or policy with ones more favourable to those in power.

Political interference has come from across the spectrum – from Podemos in Spain to the Front National in France, from Fidesz in Hungary to Labour and the Scottish National Party in the United Kingdom. The methods can take many forms, sometimes subtle (behind-the-scenes phone calls to an editor), sometimes overt (preventing a journalist affiliated with particular outlets from attending a press conference) – but the goal of controlling information flow remains the same.

The second form of interference is potentially more insidious: attempts to discredit media outlets by smearing journalists, news outlets, and in some cases an entire industry in order to sow doubt about the veracity of their reporting. This is having a damaging effect, particularly on the safety of journalists, who increasingly are seen as “fair game” by the broader public and subjected to both verbal and physical threats.

Social media has provided journalists with a wide avenue to share their information and interact with readers in a public yet intimate way. This has helped media professionals in reporting and allowed for constructive debates around current events, and can help improve the quality of information available to citizens overall. However, the other side of that bargain is the growing hostility toward journalists online. This takes many forms, from tweets of sexual harassment to death threats made via Facebook. This is a widespread and pernicious issue that journalists across the continent confront on a daily basis, and is fomented by the widely reported remarks of some politicians from member states. Women are most frequently the target of such attacks.

Journalists also face a number of risks offline. When protesters pour into the streets, journalists are necessarily among the first responders – an essential part of their professional duties. Traditionally present at demonstrations to document and interpret events, media workers – whether freelance or staff – are also among the first to be corralled, targeted and injured. A number of incidents documented at protests – as recorded by the Mapping Media Freedom project – provide insight into the multidimensional threats that journalists confront when called upon to report from the scene of demonstrations, whether small or large. These include a lack of understanding among some police forces about the role of media at such events.

A significant but underreported trend during the period was the threat to public broadcasters. A number of national broadcasters were brought under closer government control. Taken together, these reports outline the importance of maintaining the editorial independence of these vital public services.

This report is also available in PDF format