In the UK and France, freelance journalists stand up for their rights to fairer, better and faster pay 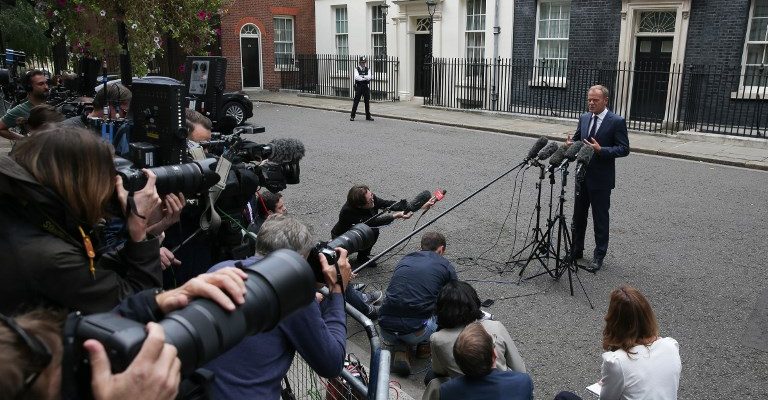 
Both in France and the UK, freelance media workers have joined forces to tackle the unlawful working practices of media owners. They demand the end of payment on publication, to be paid for all their work, not just on the basis of what has been published, only after it has been published. They also expect to receive payments promptly, instead of enduring huge delays and being left out of pocket.

Media workers are under pressure from employers who are cutting editorial budgets, slashing jobs and undermining trade union organisations. Many journalists have been forced into what we call “fake freelance” positions by employers who break local rules on employment by using freelancers to fill full-time posts while avoiding state welfare and social charges.

It’s a global trend in the media sector, the industry has been at the forefront of deregulating pay, status and working conditions according to a recent study of the International Labour Organization “Challenges and opportunities for decent work in the culture and media sectors”. One-third of the European Federation of Journalists (EFJ) members are now freelancers.

In the UK, freelancers launched a campaign #FairPayForFreelancers on Twitter on February 5, 2019, supported by the EFJ member the National Union of Journalists (NUJ). The open letter (below) can be signed here.

In France, the freelance media staff published an open letter in the daily Libération under the name #raslaplume. They share the demands of British freelancers. They also underpin that even public broadcasters abuse fixed term contracts and freelancers for missions that last for years. Only the 6,550 accredited French freelancers (2017) are recognized as journalists officially. Their median monthly income amounted to €1,500 net according to a 2016 report on accredited journalists which doesn’t take into account the number of freelancers without accreditation. Those who earn less than half the national minimum wage (Smic = €1,521.22 as of 01.2019) can’t obtain it. Moreover, female media staff represents 53% of the French precarious media workforce. Female journalists rarely climb to the top: only 19% enjoy the head of the newsroom position.

Open letter: We are journalists calling upon our industry to pay its freelancers fairer, better and faster.

Freelancers are an integral part of our media ecosystem. As staff teams across our industry shrink, it’s increasingly falling to us to turn around well-reported, high-quality journalism. The reality for freelance journalists, however, is that in doing our work we routinely experience overdue invoices, find ourselves acting as de facto creditors and battle with bureaucratic red-tape when getting paid. Some report that the financial hardship they experience as a result leaves them with no option but to leave the profession.

We want to work together towards a sustainable future for our industry. We believe this starts with media outlets paying freelancers fairly and on time.

“I’m currently owed over £2,000 from a major media organisation in late payments,” a freelance journalist who wanted to remain anonymous, said. “I love my work, I’m good at it and I work very hard, but the issue of late and low payments, which cause a huge amount of anxiety and stress, and through which I feel hugely undervalued, makes me feel like I might not be able to do it for much longer.”

The number of freelancers is at a record level. According to the most recently available data from the Office of National Statistics, the number of self-employed journalists in the UK rose sharply from 18,000 in 2015 to 34,000 in 2016. For many of us, we went freelance as a result of redundancy; in 2019 alone we have already seen over 2,000 job cuts in journalism, including at Vice, HuffPost, Buzzfeed and The Pool.

“I’ve had to take money out of my savings in order to be able to pay my rent and bills this month,” the journalist said. “This creates an enormous amount of stress and means I’m unable to properly budget, let alone save.”

As we see it, there are three practical steps publications and media organisation can implement.

1. An end to payment on publication

Many publications pay freelancers only after publication of a story. This leaves a long gap between a piece of work being assigned and receiving payment for it. In effect, individual freelancers act as de facto creditors to media outlets.

“I was badly paid for a substantial piece of reporting, which included a large edit, and was then informed that it was the magazine’s practice not to pay until a month after publication,” freelance journalist Jez Fredenburgh said, “It took two months to be paid.”

“I recently filed a piece to a major digital media outlet and I included my invoice. I was told this wouldn’t be accepted until the story was live on the site and that they would only pay for the number of words he decided to publish (not the number he commissioned),” another journalist said. “It was 60-plus days after publication and following the threat of legal action that I finally received my payment.”

Another journalist added: “It’s humiliating to have to keep pestering editors, politely asking that they pay you for work you did months ago and which they have published.”

In other self-employed industries, it is common to pay for work upfront or at least pay a deposit for it. We are calling on media outlets to pay half the commission fee upfront, upon submission and the rest upon completion of final revisions.

The Late Payment of Commercial Debts (Interest) Act 1998 entitles self-employed workers to a statutory late payment fee on goods and services provided. The law stipulates that a fee of £40, plus interest, can be charged to companies who are overdue on payments worth up £999. This fee rises to £70 if the value of service is £1000 or higher.

Despite the fact this is the law, many freelance journalists have found companies ignore these charges.

“I waited months for a payment from a big glossy women’s magazine. I chased and, in the end, decided to charge a late payment fee. The publication immediately processed my invoice but they completely ignored my late payment fee and all subsequent emails about it” said journalist Vicky Spratt.

“I felt insignificant, frustrated and, ultimately, out of pocket because when you’re freelance time is money and I had spent so much trying to get to the bottom of why I hadn’t been paid for completed work,” she added.

Others said they cannot even issue a fee. “I feel unable to add the late fee charge because I may lose work with that editor in future,” one journalist said.

“Unless you’re really on good terms with the person who commissioned you, you feel wary next time you pitch,” another journalist said. “As much as chasing invoices costs money, so does sending pitches to people you think are pretty certain won’t take it on the basis they think you’re rude or grabby. That worry amplifies a lot.”

We are calling upon media outlets to commit to paying their freelancers within 30 days. If they miss this deadline, they must pay the statutory late payment fee as defined by the Late Payment of Commercial Debts (Interest) Act 1998.

Freelancers routinely come up against payment systems that are not in line with modern working practices.

“A huge publishers’ finance dept told me that there was ‘confusion’ because I’d filed one invoice for £200 and another for £500 and because one had been paid they didn’t pay the other one,” one freelancer said.

Time pressures on editors and a lack of communication between internal departments often leave freelancers to fall between the digital cracks. “It’s quite common for editors to say they think they’ve put something through, when they haven’t, or to say they will put it through the next day and then forget,” another journalist said.

We are calling upon media outlets to review their freelancer payment systems to identify where the bottlenecks are and to address them.

Journalism faces an uncertain future at a time when civic engagement is needed more than ever. Sustaining the industry starts with us working together to ensure all journalists have the systems in place to do their best work. Let’s start with the fair treatment of freelancers.
Respectfully,