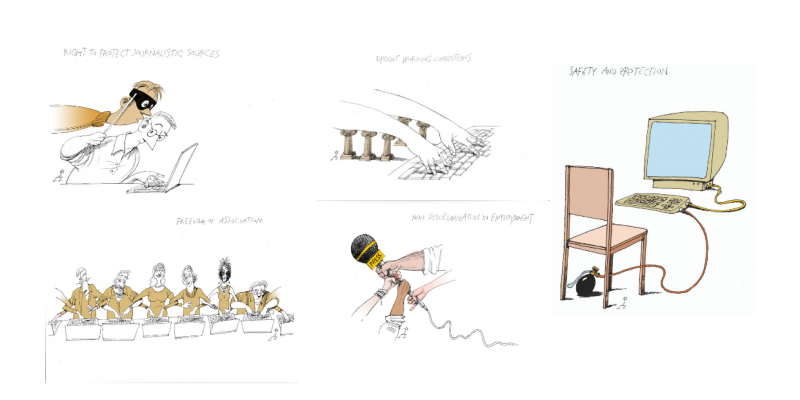 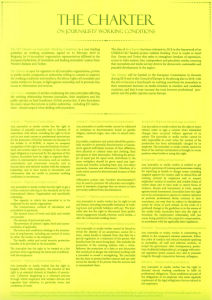 The EFJ Charter on Journalists Working Conditions is a guideline on working conditions, signed on 12 February 2019 in Belgrade (Serbia), by 14 journalists’ organisation representatives affiliated to the European Federation of Journalists and leading journalists’ unions from Western Balkans and Turkey.

The Charter is open for signature to all journalists organisations, private or public media companies or authorities willing to commit to improve the working conditions and reinforce the labour rights of journalists and media workers in Europe, to fight against censorship and to promote free access to information and sources.

The Charter contains 10 articles condensing the main principles affecting the working relationship between journalists, their employers and the public opinion as final beneficiary of their production. It also formulates the main values that private or public authorities – including EU institutions – should respect when dealing with journalists.

The idea of the Charter has been initiated in 2018 in the framework of an UNESCO-EU funded project entitled Building Trust in media in South East Europe and Turkey that seeks to strengthen freedom of expression, access to information, free, independent and pluralistic media, ensuring that journalists and media are key drivers for democratic, sustainable and peaceful development in the region.

The Charter will be handed to the European Commission in Brussels during 2019 and to the Council of Europe in Strasbourg also in 2019, with the aim to raise to become a benchmark on working conditions for journalists in their assessment exercises on media freedom in member and candidate countries, and that it may increase the trust between professional journalists and the public opinion across Europe.

The Charter on journalists’ working conditions 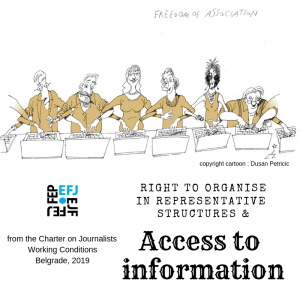 Freedom of association Any journalist or media worker has the right to freedom of peaceful assembly and to freedom of association with others, including the right to form and to join trade unions or professional associations for the protection of his/her interests (as foreseen by the article 11 of ECHR). A report on company recognition of the right to exercise freedom of association and actions taken by company in line with its legal obligations is presumed by the signature of this charter. Journalists have the right to organize themselves in representative structures, such as workers commissions and newsrooms councils, and to discuss labor and editorial matters with the company leadership, and to have access to documents and information that are useful to promote working conditions in newsrooms.

● The capacity in which the journalist is to be employed by the media organisation
● The remuneration, method of calculation and periodicity of payments.
● The normal hours of work and daily and weekly rest periods.
● The amount of paid annual leave.
● The provision of authors’ rights, food and accommodation, if applicable.
● The terms and conditions relating to the termination of employment, including any period of notice by either the worker or the employer.
● The health, safety and social security protection benefits to be provided to the journalists

The journalist has the right to be treated as a fair partners when negotiating the terms and conditions with the employers.

Right to collective bargaining Any journalist or media worker has the right to bargain freely with employers, the exercise of this right is an essential element in freedom of association. Collective bargaining is a voluntary process through which employers and workers discuss and negotiate their relations, in particular terms and conditions of work. 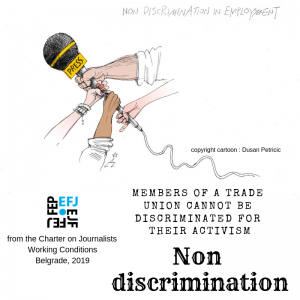 Non discrimination in employment Any journalist or media worker cannot be subjected at workplace to discrimination based on gender, religion, national origin, race, colour or sexual orientation. Journalists, employers and unions should be particularly sensitive to potential discrimination or harassment against individuals because of their affiliation, their physical or cultural traits and clothing, their perception or their association. Following the principle of equal pay for equal work, individuals in the same workplace should be given equal pay (payments and benefits, including basic pay, non-salary payments, bonuses and allowances). Members of a trade union cannot be discriminated because of their activism.

Affirmative actions (aka “positive discrimination”) may be used to promote the education and employment of members of groups that are known to have previously suffered from discrimination . 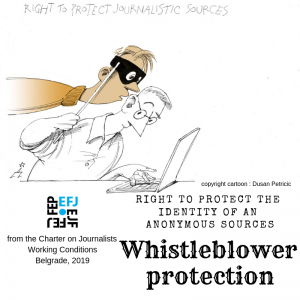 Right to protect journalistic sources Any journalist or media worker cannot be forced to reveal the identity of an anonymous source for a story, unless he/she is released from that duty by a special regulation or a statement of the person who benefits from the secret being kept . This includes the protection of the working relation with a whistleblower, the protection of a data or any document that would put in danger the individual working with a journalist to reveal a wrongdoing. The journalist has the duty to protect his/her sources and can only reveal the identity if it’s proven that the sources lied or manipulated them. 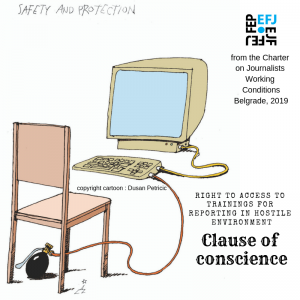 Safety and protection Any journalist or media worker is entitled to get access to provision of training and awareness-raising for reporting in hostile or danger zones, including targeted support for women staff, to attend first aid training covered by employers and to request employers’ actions to monitor and combat forms of online abuse and to have tools to report forms of violence, threats and harassment at work, namely against sexual harassment. Journalists have the right not to be constrained to express or endorse opinions or perform professional duties contrary to their conscience, nor may they be subject to disciplinary action by virtue of such refusal. In the event of a profound change in the guideline or in the nature of the media body, journalists have also the right to terminate the employment relationship with just cause, being entitled to the respective compensation, in accordance with the applicable labor legislation.

Good governance and ethical standards Any journalist or media worker is committing to adhere to the company’s mission statement, follow the codes of conduct and ethical standards applying to journalists, all staff and editorial sections, to accept the governance rules (transparency, protection of editorial independence), to engage with external regulators (press council, etc.) and to promote integrity through cooperation between colleagues. 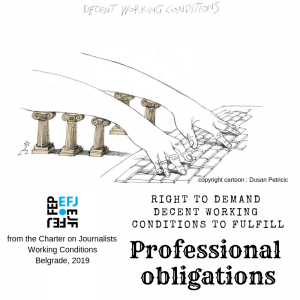