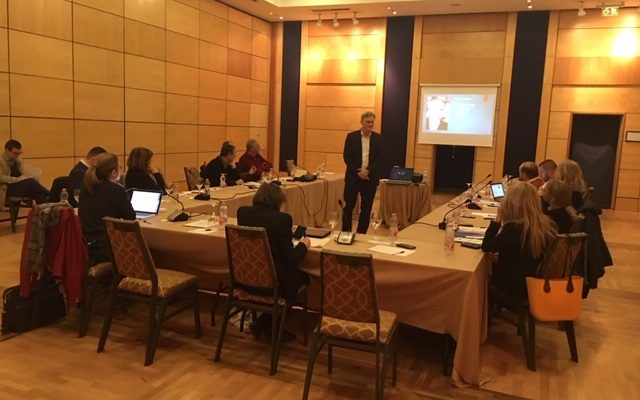 
The regional workshop on developing  complaint mechanisms and/or improving existing ones for Public Service Media in Western Balkans has started today, 21 February, in Tirana, Albania.

Participants from all six broadcasters will exchange current practices in their organisations on dealing with complaints and how to make such mechanisms better known to the audience, with the advice from the two European experts – Muriel Hanot (Director of the Belgian Press Council) and Tim Pauwels (Ombudsman of the Belgian Flemish Public Service Broadcaster VRT).

This regional workshop, which is organised by the European Federation of Journalists, is the second one after the successful workshop on editorial guidelines which took place in Belgrade in October last year. It  is crucial in providing a platform for all relevant stakeholders to openly talk about current practices in their own media organizations regarding complaint mechanisms and in guaranteeing that psm are not politically controlled but in search for dialogue with its audience.

The workshop is part of the activities implemented within the Programme of Assistance to Public Service Media in the Western Balkans, which aims to contribute to the media reform and professional development of PSM in the region and strengthen their ability to produce increasingly pluralistic, independent and accountable content. The beneficiaries of the project are the six Public Service Media in Albania, Bosnia and Herzegovina, Kosovo, FYR Macedonia, Montenegro and Serbia. The project is implemented in the period from February 1, 2018 to July 31, 2020. The Service Contract of the European Commission has been awarded to the consortium led by the International Federation of Journalists (IFJ) together with the European Broadcasting Union (EBU), the European Federation of Journalists (EFJ), the Austrian Public Broadcaster (ORF), the Balkan Investigative Reporting Network (BIRN) and the Eurovision News Exchange for South-East Europe (ERNO).