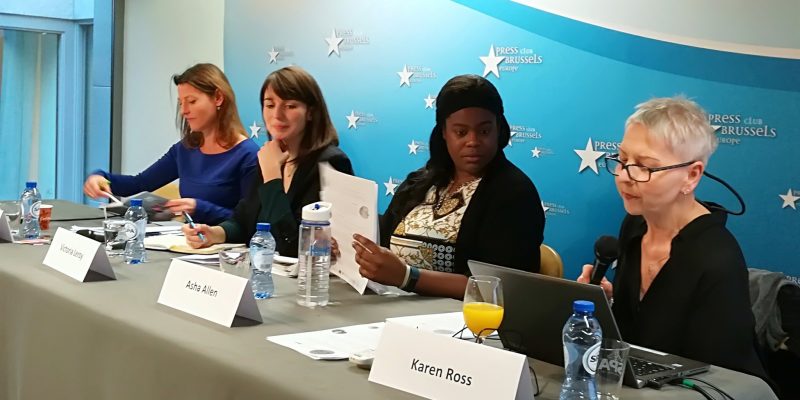 
Building bridges among journalists, students and media educators to improve gender equality in newsrooms and media content. This is what the Advancing Gender and Equality in Media Industries (AGEMI) project stands for. On 26th February, the EU-funded project launched its online platform on gender and media at the Press Club in Brussels.

The web platform provides a resource bank of over 100 best practices on gender equity in media as well as free learning resources to support journalism trainers and educators in their curricula. The project itself also included a summer school and internships for 30 students across the EU.

The AGEMI consortium is composed of the Universities of Newcastle, Padova and Gothenburg, as well as the European Federation of Journalists (EFJ) and the Permanent Conference of the Mediterranean Audiovisual Operators (COPEAM).

The launch took place as part of a seminar involving key speakers from women’s NGOs, European institutions and media professionals. All spoke about their work to create a more inclusive media sector for women and men, and the particular challenges that this task encompasses.

AGEMI project leaders Karen Ross of Newcastle University, and Claudia Padovani of the University of Padova insisted on the accessibility of web-based materials in a variety of languages besides English, in which most materials on gender equality currently exist. “The resources we collected from across the world was an intentional effort to dismantle the Eurocentric standpoint of these lessons”, Karen Ross said.

Victoria Leroy of the European Commission (DG Connect) noted that fighting gender stereotypes through the enforcement of directives in the audiovisual service industry was imperative. Leroy highlighted a recent EU study on European regulators in the audiovisual sector, which held that women in Europe appear on-screen less frequently than men; are subject to more stereotyping than men; and, off-screen, are underrepresented in senior and technical positions in the industry. She announced that this year, an expert group of regulators would investigate good practices from across the audiovisual industry in order to address these inequities.

Cécile Gréboval of the Council of Europe spoke about the council’s longtime goal of increasing gender equality in terms of pay, employment access, media content, and ending sexist hate speech. Gréboval recalled the latest Global Media Monitoring Project (GMMP) finding that just 24% of people who appeared in the news in any form in Europe in 2015 were women. She also highlighted the need to advance case law, which currently is not related to sexist discrimination. She called for more media coverage of female political candidates as well as more female reporters covering stories on politics. Currently, female reporters and experts in Europe are primarily relegated to the task of covering so-called soft stories such as health-related topics, with just 16% of women covering politics.

Asha Allen of the European Women’s Lobby, addressed the need to change EU media legislation to encompass online media. Allen began by dismantling some commonly held notions about cyberviolence. “Violence against women online is violence off-line,” she stated. “Stalking using GPS, economic violence through online bank account hacking, and harmful photos that perpetually remain in the cybersphere are just some forms this can take” she added. Allen spoke of the media as being too “pale and male” and called on the need to make legislation uniform, recognize that online violence has real-world consequences, and qualify it as a cybercrime—all from an intersectional perspective. To do this would be to create a safer digital environment for everyone.

Czech Member of European Parliament Michalea Sojdrova, Rapporteur of the 2018 gender and media report, supported the importance of establishing gender parity in media, which is important, she argued, because the media “shapes public opinion and co-creates reality.” In her report she encouraged self-regulation for media companies on the issue of equality, supported people campaigning against gender stereotypes in advertising; advocated for an end to hiring and workplace discrimination against women, and recommended establishing a database of female experts, as already exists in Belgium (Expertalia).

Safia Kessas, a journalist at the Belgian public broadcasting network RTBF and head of diversity and equality, presented her work to improve gender equality in RTBF structures and content. She insisted on increasing the representation of women especially in expert roles in media, as “journalism continues to be a male-dominated field”, as evidenced most recently by the League du LOL scandal in France and the fact that only 37% of speakers in news programs are women. “RTBF is a leading local example of a media organization that has adopted gender equality protocols, the only Belgian French media group to do so,” she said. This includes less stereotypical language in reporting, as well as coaching sessions of experts from the Expertalia database and a new digital information project to raise women’s voices, set to launch this 8th March.

Finally, Martine Simonis of the Belgian French journalists union AJP, an IFJ/EFJ affiliate, presented AJP’s extensive efforts to advance gender equality in media. “It is unacceptable that women make up less than 20% of reporters in Belgian media, with 9 out of 10 people interviewed being male, and women especially invisible in sports, politics, and economics coverage” she said. To improve the quality of journalism by increasing the representation of women, AJP created a tool for journalists called Expertalia. This functions as a database of female experts and men from minority backgrounds that, through media coaching with RTBF, helps make these experts visible in the news.

“We need to make AGEMI sustainable” concluded Karen Ross, calling for further collaboration and resource input from gender equality supporters before July, when the program will need to secure more funding to continue its crucial work.

In the meantime, the consortium is finalizing a phone app that aims to allow readers to analyze the gender balance in specific news articles.