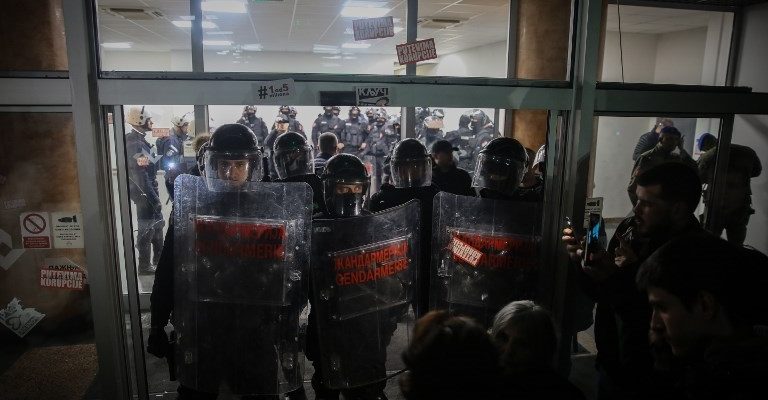 
A group of around 100 anti-government protesters stormed the building of the Serbian national broadcaster RTS in Belgrade on Saturday 16 March, demanding to be allowed to make a public address live on air. The European and International Federations of Journalists (EFJ and IFJ) join their Serbian affiliates, Journalists’ Association of Serbia (UNS) and the Independent Journalists’ Association of Serbia (NUNS), in condemning this incident and demanding all parties to respect RTS’s editorial independence.

Protesters, who wanted to voice their opposition to Serbian President Aleksandar Vucic, had to be evacuated from the RTS building after about 50 riot police were deployed to the premises.

It was the first time in 20 years that protesters invade the Serbian public TV headquarters. According to the UNS, some journalists were pushed and threatened by protesters. However, and despite of the tension, no one was hurt in the incident.

“Protestors asked me to make a special show where they could talk about their demands and they asked me to call my superiors. I called them and they said the same thing I already explained: this was not possible. We asked them to leave voluntarily but they refused. Police had to push them out and some of the resisted so the police used some force. There was no heavy beating. ”, said to the IFJ Zoran Stanojevic, member of UNS board and RTS editor who witnessed the incident. Watch the full video on related content.

“We could not work while the building was under siege, with editors and journalists locked in a room(…) there were some damages, like broken doors or windows, but it was clear that destroying the building was not the aim of protesters, and any of our staff was hurt. After they left, we could come back to work,” he added.

IFJ General Secretary, Anthony Bellanger, said: “The invasion of the premises of any media is unacceptable in democratic societies. We call on all parties, including the government, to protect the editorial independence of RTS. Serbian society deserves an independent public broadcaster.”

“Public television journalists must be protected from government interference, as well as from interference from any other source,” added Ricardo Gutiérrez, EFJ General Secretary. “Serbia needs a new media law that guarantees the full independence of the management and financing of the public broadcaster. In the meantime, the safety of RTS journalists must be ensured.”

UNS said in a statement that the incident is an “inadmissible pressure on journalists, media workers and the independence of the RTS editorial policy. The much needed dialogue in the Serbian society cannot be conducted in an atmosphere of violence and illegitimate occupation of the RTS building in the presence of people with balaclavas and police.”

NUNS said in its statement: ”Government bears most of the responsibility of these incidents. This is the result of years long spread of hate speech, hindering of media freedom, and the creation of an atmosphere of lynch and the abolition of public dialogue (…) We call upon all state institutions to take this alarming event most seriously and to finally establish the rule of law in Serbia.”

The EFJ and IFJ submitted an alert on this incident to the Council of Europe Platform for the Protection of Journalism.