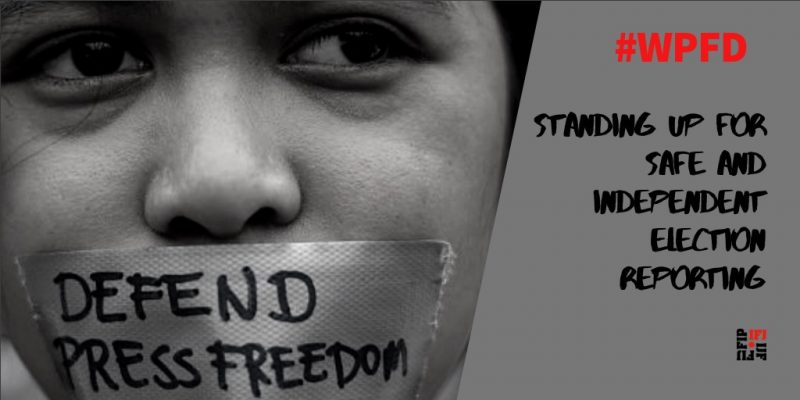 
To mark World Press Freedom Day on 3rd May, journalists from across the world are joining forces to launch tips for safe and fair coverage of elections at a time when politicians and their supporters are increasingly turning their fire on reporters.

The EFJ supports IFJ campaign exposing the abuse of power, disinformation, internet shutdowns, self-censorship, harassment and violence as ongoing challenges facing journalists when reporting elections. The campaign is calling on governments to ensure a safe working environment for journalists to allow them to report with full objectivity, impartiality and balance and on all politicians not to stigmatise media.

This year’s UN World Press Freedom Day‘s  theme is “Media for Democracy: Journalism and Elections in Times of Disinformation”  and the  IFJ will address ongoing challenges facing journalists in elections and the importance of reporting fully and freely for the public to make informed decisions at events across the world.

“Elections represent a test of political commitment to democracy, when the impulse to manipulate media and to control information is strongest among ruling parties and candidates running for office”, said IFJ President Philippe Leruth. “Too often, journalists are being put under huge and unnecessary pressure and we call on all governments to take specific precautions to allow journalists to report freely.”

To support its campaign, the IFJ has compiled a series of testimonials from union activists across the world whose countries have just been through or will run elections this year and where election coverage has been marred by self-censorship, disinformation and attacks on media and the right to report.

“We noted a trend from politicians to systematically disqualify the work of journalists who publish information they don’t agree with », said Sophie Lejoly, deputy General Secretary at AJP, Belgium.

In Ukraine, Sergiy Tomilenko, chair of the National Union of Journalists of Ukraine (NUJU), describes an atmosphere of hostility towards critical media and investigative journalists who revealed cases of corruption in the highest power circles.

On the eve of the 2019 elections NUJU called on leading Ukrainian politicians to sign the “Declaration on the Defense of Freedom of Speech.” The document specifies that the applicants for the highest office in the state would commit among others to:

The initiative was supported by 13 candidates for the presidency, including the leader of the race – actor and TV presenter Volodymyr Zelensky.

“Our efforts are aimed at ensuring that those who attack journalists will face severe punishment and understand that the defense of freedom of speech must be a priority for the newly elected government”, said Sergiy Tomilenko.

The IFJ’s new tips on elections’ reporting combine professional ethics and safety tips to support journalists around the world.

“Raising standards in journalism to levels of public expectations during elections campaign is more relevant than ever before, in the current climate of fake news fuelling misinformation on increasingly influential social networks. At the same time, covering elections carries some safety risks, which journalists need to assess, prevent and reduce.” says Philippe Leruth.