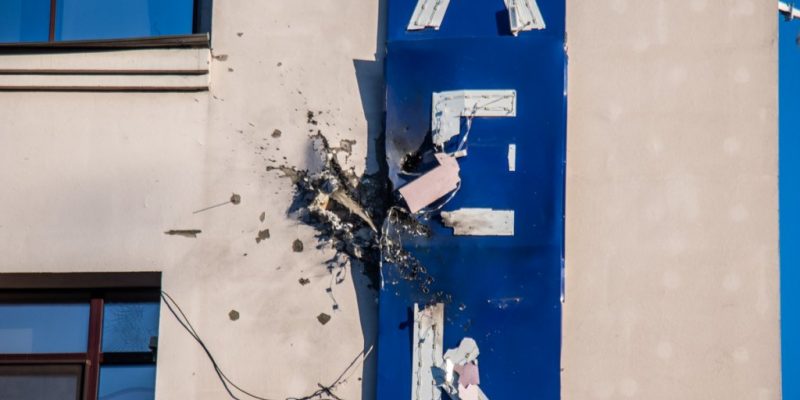 The European Federation of Journalists (EFJ) joined its affiliate in Ukraine, the National Union of Journalists of Ukraine (NUJU), in condemning the attack on private TV broadcaster 112 Ukraine. On 13 July, two unidentified persons targeted its office on Dehtiarivska street 21G, in Kyiv, using a grenade launcher.

The attack happened at 3.27 am and was recorded by three CCTV cameras installed outside the media building. The incident caused damages to the facade and nearby parked cars, but didn’t injure anyone.

At 3.40 am local residents alerted the police who found a spent tube used to fire a rocket-propelled grenade. The press service of the national police qualified the incident as a “terrorist act”. The Security Service of Ukraine started an investigation.

Channel 112 had received a warning earlier this week after the TV planned to broadcast the public premiere of the documentary “Revealing Ukraine”, considered as “anti-Ukrainian narratives of Kremlin propaganda” by the Ukrainian ministry of information policy. Channel 112 cancelled the broadcasting in order to avoid possible legal consequences and seeked police protection after some employees received messages with threats. According to the NUJU, the police didn’t take any actions, neither before the attack nor after. 112 Ukraine now strengthened its protection on its own.

NUJU notes that systemic impunity for previous attacks on journalists and media outlets provokes new attacks. “Failed or dismissed investigations of previous attacks on Ukrainian media sent a signal of impunity for anyone who would like to carry on with acts of intimidation, including the organisers of this terrorist attack “, said NUJU President Sergiy Tomilenko.

112 Ukraine is owned by the opposition politician Taras Kozak, member of the Opposition Platform for Life party.