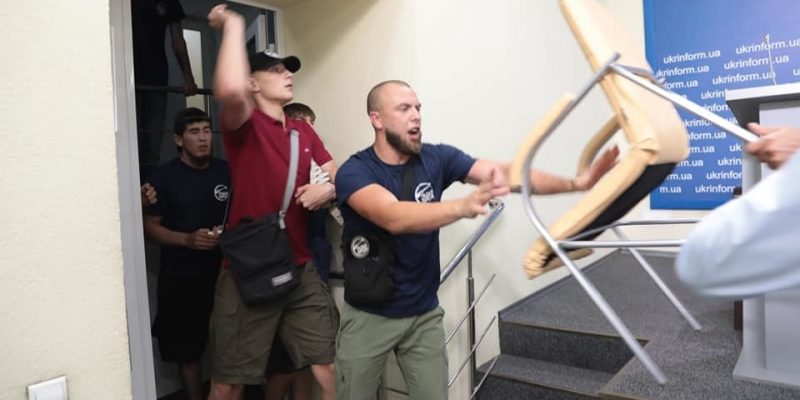 
On 30 July, about a dozen men dressed in T-shirts with the inscription “Tradition and Order” violently entered the press center of the Ukrinform news agency in Kiev, Ukraine, during a press conference of parliamentary candidates. The European Federation of Journalists (EFJ) joins its member National Union of Journalists of Ukrain (NUJU) in condemning the incident.

After entering the building, the group broke the door to the press-hall and damaged the equipment and furniture. The group started to push and beat Ukrinform staff members. they also threw eggs and poured water on an independent candidate from the town of Pokrovsk in eastern Ukraine, Andrey Aksyonov. They accused the politician of sympathy for Moscow and separatism. The other candidate, Serhiy Korshukov from the European Solidarity party was not attacked. During the press conference, the two candidates had been speaking about alleged vote-rigging in the recent parliamentary elections.

Two media workers of Ukrinform technical department and the head of the press center were injured. One of them suffers from an eye injury and several bruises. The whole incident was broadcasted live on the Ukrinform Youtube channel. Two attackers were taken to the police department for a questioning. Kiev police opened a criminal case on the incident. The organization “Tradition and Order” is categorized as “radical nationalist” by Human Rights Watch and known for attacks on Ukrainian Roma, LGBT persons and human rights activists.

Sergiy Tomilenko, NUJU president, expressed its solidarity with colleagues at Ukrinform. “We urge law enforcement officers to carry out a professional investigation, to identify the attackers and to provide severe punishment for obstruction of journalistic activity and for beating of employees of the media”, he demands.

The EFJ showed itself concerned about this violent assault: “Journalists should have the right to attend a press conference in a calm atmosphere, without any interference or threats of violence. This attack constitutes a blatant violation of freedom of expression and freedom of the press.”, states Ricardo Gutiérrez, general secretary of the EFJ.