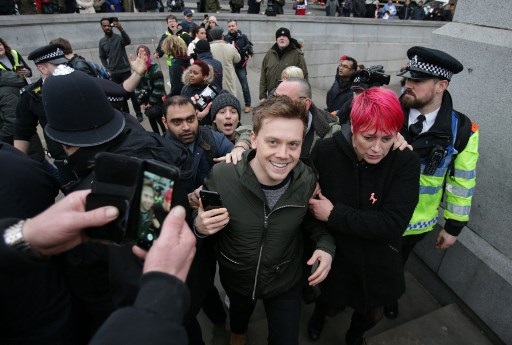 
Guardian journalist Owen Jones has been physically assaulted in London while celebrating his 35th birthday with friends in the early hours of Saturday morning. The European Federation of Journalists (EFJ) condemned the outrageous attack on Owen Jones and called on the British authorities to investigate the case and bring the perpetrators to justice.

After leaving a bar near King’s Cross in London on the night of Saturday 17 August, at about 3am, a group of men approached Owen Jones and his friends and began hitting him in the head from behind. According to reports, Jones fell to the ground after being kicked in the back by one of the men. The other attackers proceeded to kick him in the back and head. When his friends tried to intervene, they were also assaulted.

London’s Metropolitan police are reviewing CCTV footage of the attack but have so far made no arrests.

Jones said that in the last year he has repeatedly been the subject of abuse (including homophobic abuse), threats, and attempts to use physical violence. He said that he has also been the target of an increasing volume of death threats from far-right sympathisers.

Michelle Stanistreet, NUJ general secretary, said: “Journalists – and journalism – are coming under attack on an increasing basis and far right forces are clearly being emboldened to act on their abhorrent views. Whether that manifests in online abuse and harassment, threats or physical attacks like the one meted out on Owen Jones this weekend – it is all designed to create a climate of intimidation and to make journalists and commentators think twice about the work that they do, and the opinions they share. The perpetrators of any threats or violence must obviously be brought to justice, but it is also vital that a more strategic view is taken by the police and authorities to robustly and effectively tackle this coordinated surge in violent extremism against journalists and media workers.”

Labour leader Jeremy Corbyn sent a message of “solidarity” to Jones. He said: “Owen believes it was politically motivated, and we know the far right is on the march in our country. An attack on a journalist is an attack on free speech and our fundamental values.”

We call on the British authorities to investigate the attack on journalist @OwenJones84 without delay. Perpetrators must be punished.

Owen Jones has a right to express views which may annoy many of his critics without being attacked. He is a significant voice at this time. https://t.co/apyfneaEvg @NUJofficial