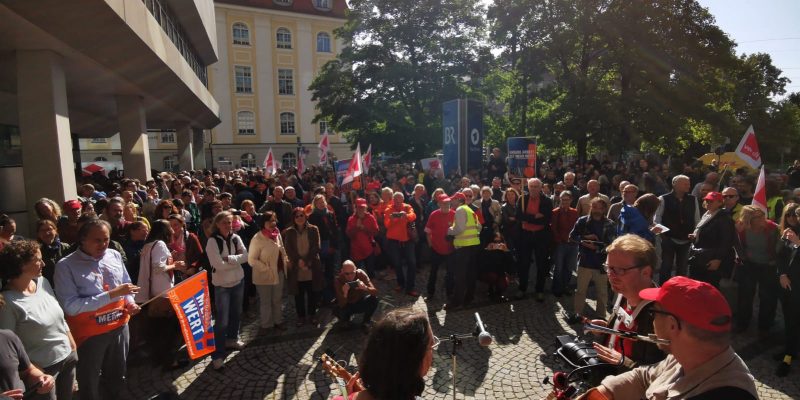 
Both German affiliates, the Deutscher Journalisten-Verband (DJV) and the Deutsche Journalistinnen- und Journalisten-Union (dju in ver.di) started on Wednesday 18 an unprecedented trade union action (warning strikes) at the ARD stations in several German Länder. Around 3000 employees of the German public service media are taking part nationwide. The European Federation of Journalists (EFJ) sent a strong message of solidarity to striking media workers.

The reason is the upcoming collective bargaining round, in which an agreement between the positions of the management and the unions seems a long way off.

“Today’s strikes, demonstrations and actions are so far unique in the history of public service broadcasting in the Federal Republic of Germany. The employees of ARD, ZDF and Deutschland Radio thus set a strong common signal for the ongoing collective bargaining: They do not want to be disconnected from wage developments in the civil service. Public service media stands for independence, which needs credible journalistic reporting. This is indispensable especially in times of hate and hate in the net and the purposeful spreading of false information and ‘alternative facts’,” said deputy ver.di chairman Frank Werneke.

The DJV and ver.di demand an increase of salaries and fees that is in line with the salaries in the public sector for both staff and freelance journalists. The public sector agreement in the federal states provides for income increases by approximately 7.8 percent over a period of 33 months. According to the DJV chairman Frank Überall, the orientation towards public service qualifications is common practice in public service media. In the collective bargaining of the ARD institutions, on the other hand, employers are pushing for significantly lower increases, which would even remain below the inflation rate. In addition, several institutions are calling for the holiday pay to be abolished, especially for newcomers. After several unsuccessful rounds of negotiations for a new collective agreement, it is now up to the journalists of the ARD stations to lend weight to their justified demands.

“We call on our colleagues to show employers and clients that good journalism has its price”, explains DJV Federal Chairman Frank Überall. There will be no ARD savings dictate at the journalists’ expense with the DJV.