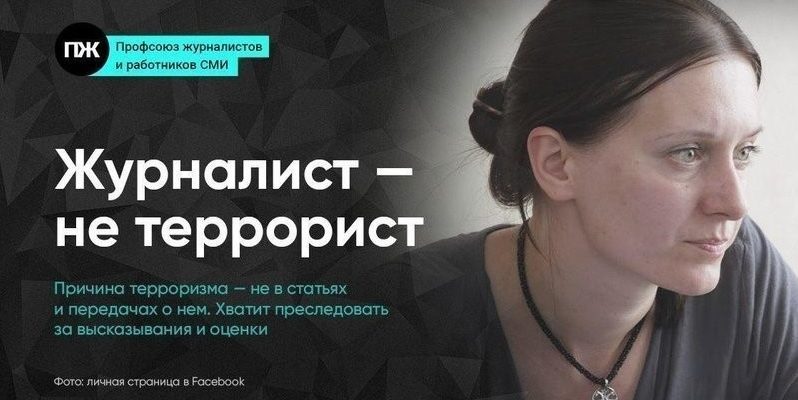 
On 20 September 2019, Russian journalist Svetlana Prokopyeva was formally charged with publicly justifying terrorism. The journalist was also asked to sign a non-disclosure agreement and a written undertaking not to leave the Pskov region.

The European Federation of Journalists (EFJ) and the Russian Journalists’ and Media Workers’ Union (JMWU) are convinced of her complete innocence and call on Russian authorities to release her without any delay.

Svetlana Prokopieva works for the local branch of the independent Moscow-based radio station Ekho Moskvy, in the northwestern city of Pskov. She was suspected of “justifying terrorism” following a radio commentary, on 7 November 2018, in which she was questioning Russia’s repressive policy as a 17-year old anarchist blew himself up outside the entrance to the Federal Security Service (FSB) in the city of Arkhangelsk the week before. “A young citizen who has only seen prohibitions and punishments from the government in his life has not been able to invent any other means of communication. Cruelty breeds cruelty. The ruthless state has created a citizen whose only argument is death”, she commented.

On 7 February 2019, the president of the Russian Union of Journalists (RUJ),Vladimir Solovyov, told RIA Novosti that the journalist had not violated any law by making these comments.

On 4 July 2019, Svetlana Prokopyeva was placed on the Rosfinmonitoring’s list of “extremists and terrorists” (Federal Financial Monitoring Service of the Russian Federation) and her accounts were blocked.

On 13 August 2019, Svetlana Prokopyeva filed a complaint with the ECHR. Prokopyeva complained on grounds of the search in her apartment, in February 2019, and seizure of equipment and documents, which endangered the confidentiality of her journalistic sources.

JMWU has repeatedly referred to the case as an obvious attempt to intimidate journalists. The union launched a petition in support of the journalist.

The EFJ joined JMWU in calling on the Russian authorities to stop misusing terrorism legislation to silence journalists.