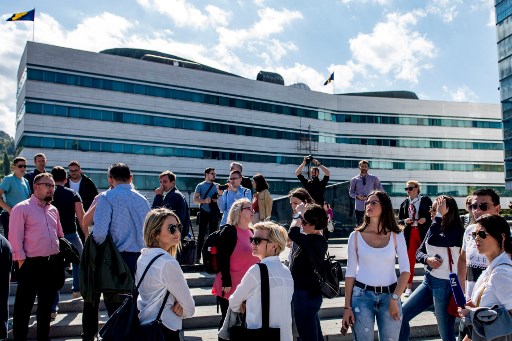 A journalist of Radio Sarajevo was attacked and several journalists were threatened by a group of fans of the Football Club Sarajevo on the evening of September 27. The European and International Federations of Journalists (EFJ/IFJ) joined its affiliate in Bosnia and Herzegovina, BH Journalists, in demanding harsh sanctions against the assailants.

After breaking into the newsroom, a group of hooligans harassed for more than two hours, including death threats, a radio reporter to remove an article about a fan who had been convicted to a five-year prison sentence for drug possession. He was then forced to call other editorial boards of portals and newspapers in Bosnia and Herzegovina asking them to delete the same article. The newsroom had received threats over the phone beforehand.

The same evening, two suspects were arrested and released with a ban on access to media outlets and journalists within 100 meters.

“Since the beginning of 2019, BH Journalists and the Free Media Help Line have registered 5 death threats and 6 physical assaults on journalists and media teams. The impunity of the attackers and the ineffective measures of the judicial institutions lead to the repetition of violence and the unacceptable violation of the freedom of the media and the rights of journalists in BiH, which must finally stop!” said BH Journalists.

Dozens of journalists gathered in Sarajevo on 30 September to demand an end to violence against journalists, urging the authorities to ensure their safety.

The Western Balkan’s Regional Platform for Advocating Media Freedom and Journalists’ Safety informed the Union of European Football Associations (UEFA) and requested their intervention on the reported incident as well as on other cases of violence against journalists in Bosnia and Herzegovina.