Catalonia: EFJ and IFJ demand an investigation into police violence against journalists 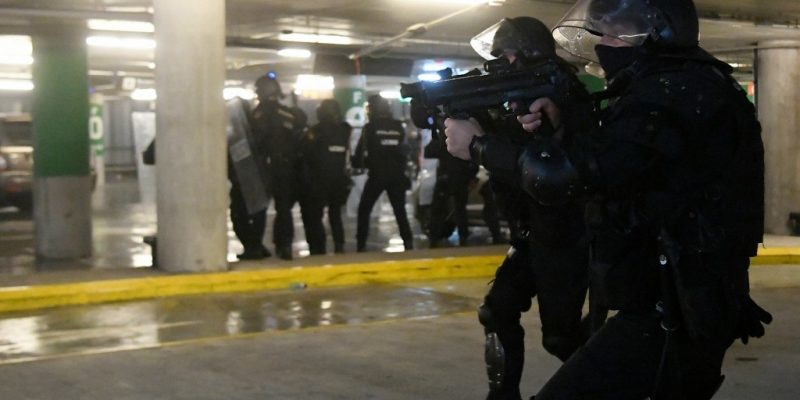 
[UPDATE] The number of journalists victims of some type of aggression while covering the different demonstrations this week in Barcelona rises to 59. On Tuesday 15, in Tarragona, a protester tore the shirt first a journalist and then pulled Canal Reus’ editor Ariadna Escoda’s hair. In Lleida, the journalist of the Catalan News Agency (ACN), Laura Cortés, was wounded in the leg by the impact of an object. In Barcelona, a photojournalist from eldiario.es, Sònia Calvó, freelance photojournalist Xavi Hurtado, journalist Quico Sallés from El Món, three photographers who prefer to remain anonymous, and a French reporter reported to have been beaten by police officers. Photographer Mireia Comas was hit by a bottle on her head. An ACN’s editor was injured by stones thrown during the protests in Sabadell. Wednesday 16, Sira Esclasans (La Directa) was hit by a foam bullet from the Police. The photographer of Ara newspaper Cristina Calderer was injured by a stone. An editor of the same newspaper, Xavi Tedó, explained that he was hit by the Police. Bru Aguiló, a photographer from Fotomovimiento, denounces that police officers broke the objective of his camera and hit him on the knee. On the other hand, images of a police aggression against an accredited photojournalist -who has not been identified- have been seen. Two collaborators of the community television La Mosca TV were beaten and another one received a foam bullet from the Police. Telemadrid has reported the attacks on two of its cameramen, one of them has suffered the impact of a glass bottle thrown by protesters. In Girona, an ACN’s editor was hit by objects thrown at the Police. and two more had to be treated in Barcelona after breathing gases. On Thursday 17, a Telecinco tv crew was attacked by extreme right-wing protesters, breaking the camera and insulting and threatening them. An El Periódico journalist, Carles Márquez, was shot in the leg by foam from a police van while he was with a group of identified journalists. In the demonstrations held last week in Barcelona and in other cities in Catalonia, there were a total of 59 journalists victims violence from the police officers or protesters, according to the latest count. There is a new case: an attack on a Cuatro tv-crew carried out by right-wing militants. There are 20 cases on Friday 18: shots of police rubber against journalists identified in the Ronda de San Pere, leaving a journalist of the Catalan News Agency (ACN) injured; Police blows in Ronda Sant Pere, two Spanish Television teams (TVE) attacked while reporting the riots (the information provided by the News Council of the channel does not specify the aggressors); a Context journalist suffered an asthma attack on Portal de l’Àngel caused by tear gas; journalist Quico Sallés (El Mundo) explains that he has received a rubber bullet in the leg while recording and then, as Sallés explains in Mèdia.cat, five policemen took him and hit him; photojournalist Juan Carlos Mohr also claims to have received a blow to him and to the camera; journalist Fermín Grodira claims to have been wound up by police agents in the Comtal street after suffering insults, a slippage and stuffing things on the floor, including the camera; journalist Arnau Maymó of Catalunya Ràdio explains that has been hurt by the police while they were saying “You do not know who we are”; photojournalist Sergi Alcázar, from El Nacional, was beaten by an agent who does not want to burden the loads; journalist Salvador Cot, director of El Mon, denounces that he has been beaten by agents of the National Police Force while taking photographs in the portal of a building on Passeig de Gràcia where the newspaper has its newsroom; freelance journalist Guillem Andrés was beaten by police despite identifying himself as a journalist; photojournalist Emili Puig received a rubber bullet in his face despite being perfectly identified and explains that leaving the hospital some agents have been making fun of him; the journalist of the Cadena SER, Albert Prat, credited while refuging at a store, has been hit by bumps on her legs despite identifying herself as a journalist; a camera of the program In Jake of Euskal Telebista was taken to the hospital after receiving a rubber bullet in the arm and denounced that he asked for help to the police to leave the place but that they did not help him; Emilio Morenati, AP photographer, injured by a foam shot on the arm; Bernat Arnangué, of AP, receives an impact of rubber ball in the ass; the photojournalist of Vilaweb Albert Salamé, hurt in the middle of the road to Via Laietana; Photographer Paco Freire reports that he had been assaulted by two anti-violence on Trafalgar Street while covering incidents, was perfectly identified and at that time there were no demonstrators, but all the policemen pushed him and beat the camera and broke it. In Girona, photojournalist David Aparicio, who worked for the Diari de Girona and was credited with a vest, was wounded by a foam bullet. On Saturday 19th, a TV3 camera was beaten by a protester after the rally in Plaça Urquinaona.

Twelve journalists clearly identified as such were targeted by police violence on 14 October in Catalonia as part of the coverage of demonstrations following the sentencing of nine independence leaders to prison terms for Catalonia’s attempted secession in 2017.

Eudald Martínez is the only victim who was not attacked by police officers: he was hit by a stone thrown by demonstrators. Most of the incidents were recorded in the vicinity of Barcelona El Prat Airport.

We sent our request to the Interior Advisor of the Catalan Autonomous Government Miquel Buch and the Spanish Minister of Interior Fernando Grande-Marlaska.

The EFJ reported these attacks to the Council of Europe Platform for the Protection of Journalism.