Being a female journalist in Europe 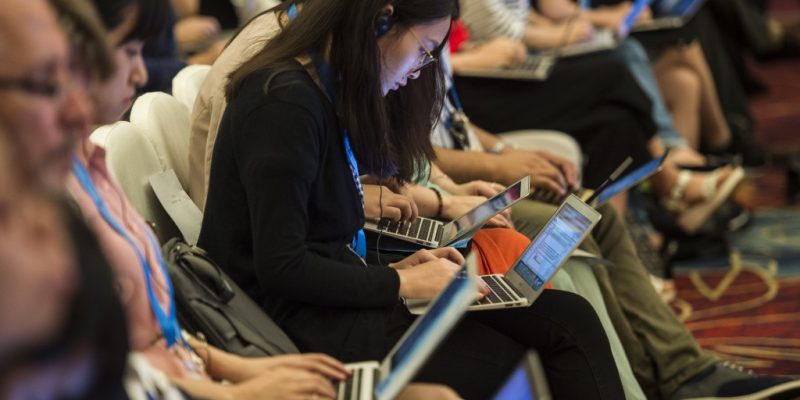 What is the status of women journalists in the European Union? Under what conditions do they work? How can they achieve work-life balance? Are their rights to freedom of expression being respected? Do they work on equal terms as their male colleagues?

The situation varies greatly from one country to another. The stars of the European flag do not shine the same way for women journalists in the 28 states of the Union. It is not the same to be a reporter in Germany compared to one in the former Yugoslavia, or in the Baltic states. The different political and cultural traditions affect considerably the practice of journalism.

The general framework for men and women was drawn by a recent report published by the Platform for the Protection of Journalism and the Security of Journalists of the Council of Europe, which warned that the environment of freedom for the media in the European states had worsened, and that press freedom was now more fragile than at the end of the Cold War. The Council of Europe annually reports about the number of media freedom violations that occur in EU countries, as well as the number of journalists arrested and killed.

The economic crisis also left a bleak picture in the media throughout Europe, which went through strong layoffs and a significant deterioration in working conditions. That deterioration was especially meaningful in the case of women journalists.

This is explained by five women who practice journalism in European Union – France, Germany, Serbia, Greece and Croatia – and who represent the sector in various trade union organisations. All of them participated in Ostende (Belgium) in a leadership programme for women organised by the European Trade Union Institute (ETUI). During this occasion, they have collaborated with ‘Conversations’ to reflect on the reality. Many of the difficulties they face are similar – such as threats to their integrity or freedom are increasing.

In Europe where democratic values are deeply routed in our society, censorship on journalists is not always obvious . In some countries, hate speech against journalists pose a great threat to journalists and media organisations.

This is explained by Maja Sever, president of the Trade Union of Croatian Journalist and worker of the public television in Croatia (HRT). The biggest threat to press freedom in her country is “the great amount of hatred and intolerant speeches that fill the media and the public sphere, including direct incitement to attacks against journalists”. According to Sever, in Croatia there is no efficient regulation, and the one that exists is not enforced

Sever received death threats for doing her job during the coverage of the refugee crisis in October 2017. “Women are particularly vulnerable, because they are often more exposed to hatred in social media, without protection or an adequate response. And in the absence of collective agreements in the media there is no adequate protection for their rights,” said Sever.

The situation of journalists in Serbia is even worse. The country is in the 90th position in the press freedom ranking of Reporters Without Borders, and has dropped 14 places during the last year, according to Yelena Cosin, journalist for the Vecernje novosti newspaper and a member of the SINOS union.

“Those who report corruption or are critical about the government are pointed out as ‘liars’ or ‘foreign spies’ by SINOS President, Aleksandar Vucic. Journalists who have uncovered corruption cases, such as Milan Jovanovic, have been attacked. I often work under pressure, and I see how texts that do not support political leaders in power are not published or are corrected before they are published,” she says.

Women journalists face the same pressures as their male counterparts regarding the content of their information, but they also suffer from sexual harassment, something that unfortunately is common to all countries.

In France, the case of Ligue du Lol in February 2018 has shocked the journalists’ community. A private Facebook group formed by editors, journalists and advertising managers from different media, mostly men, who were investigated for insulting and continuously harassing women in networks.

The case has been considered the French #MeToo. After being reported by the Liberation newspaper, public opinion was shaken and judicial investigations were carried out leading to the dismissal of several of those who were involved.

“Some of the harassed journalists suffered from depression and leave the media,” said Aurélie Constant, a member of the executive board of the Syndicat National des Journalistes (SNJ-CGT) and editor of a local newspaper in northern France. According to the journalists, sexism and harassment are common in the newsrooms. The problem is affecting even more immigrant women with precarious jobs.

In Germany, the problems for journalists are somehow different. For Andrea Roth, vice president of the Federation of Bavarian Journalists / Part of German Journalist Federation DJV and worker of the German public television ARD, the proliferation of fake news and hate speech is one of the main threats for German journalists, especially in matters of special sensitivity such as information on refugees and immigrants.

In this field, the informants receive hostile messages from the political environment of the far-right formations, which promote a negative discourse about refugees. “We need more media literacy so that people can learn to distinguish between news and falsehoods,” she emphasised.

Roth, who is also reserve member in the steering committee of the European Federation of Journalists (EFJ), adds that in Germany, journalists face certain dangers for their integrity in the manifestations of the most extreme right, where there have already been cases of several injured journalists. Outside the country, the greatest risks are in countries with an armed conflict. “We had never had so many journalists jailed or killed,” she said.

But the greatest difficulty facing journalists women from all over Europe in the workplace is the precarious working conditions they are in. They are punished by the gender pay gap.

“Women journalists have lower salaries and have to fight harder to reach management positions; they are more fragile and precarious than men,” said Aurélie Constant.

In Germany, some media companies offer 9 euros for a photograph and freelance journalists are mostly affected by the low salaries.

“The media work with fewer and fewer people. And this in the private sector and in the public. In the public media where I work, for example, millions of euros are being cut. The only way to improve in this field is to join associations and unions who defend the rights of journalists to fair wages,” said Andrea Roth.

According to Roth, in the Bavarian region, there are no special problems for women or independent publishers at an intermediate level, but at the level of leadership and management of the organisation, it is always men who make the decisions. “We need new leadership strategies,” she said.

In Croatia, most of the media operate without collective agreements, “the statutes of the newsrooms are not found and the trade union and professional associations end up discouraging,” said Maja Sever.

But the worst case in labour matters is in Serbia where, except for the media based in Belgrade, the amounts paid to journalists are ridiculous. “In my city, in NIš, journalists on local television are being paid 1.4 euros per coverage,” said Yelena.

Can journalists women achieve work-life balance? “It’s very difficult,” said Greek journalist Maria Konstantopoulou. “Many women in Greece are forced to choose. If they do not have the help of their husband and their parents, the situation is quite complicated for them,” she considers.

In Serbia, journalists miss facilities to take their children to kindergartens. There, work-life balance is a “skill”, developed by these professionals on an individual level and based on effort, but without great help from the State.

On the other hand, in countries like Germany, journalists can spend hours and enjoy permits or “family vacations” by having a child whenever they work for others, in organisations such as public television or large media and corporations, where sometimes there are even corporate nurseries. The problem, as in most countries, is the gap in which freelances are found, which do not enjoy the same benefits, as well as the professionals who work in small media.

Therefore, there are similar problems for EU journalists, such as difficulties in work-life balance or the wage gap. But in the situation of female journalists, Europe seems to be a continent of two speeds: the dangers against freedom or integrity are much more serious in some countries than in others, and it seems urgent that European institutions adopt regulations that provide stability to women who are dedicated to one of the most important trades for democratic states, and also, why not saying so, one of the most mistreated.