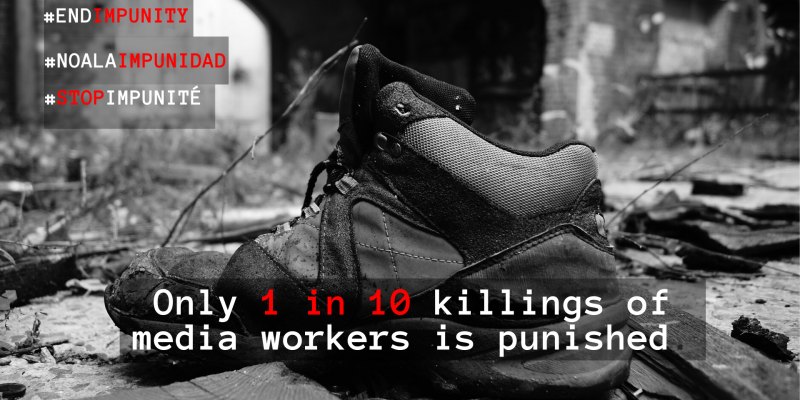 
The European Federation of Journalists (EFJ) joined IFJ 3-week campaign to expose the staggering levels of impunity for crimes against journalists and the lack of international action to combat the rising tide of threats and abuse faced by journalists worldwide.

The campaign will kick-off on 2 November marking International Day to End Impunity for Crimes Against Journalists and run until 23 November, the anniversary of the Ampatuan massacre in the Philippines, in which at least 32 media workers were killed.

The Federation has recorded 1064 killings of media professionals in the past 10 years. Yet, only one murder in every ten is punished. According to UNESCO, 93% of the victims are local journalists.

“Impunity occurs when those who place a bomb under a journalist’s car remain seated in the institutions of a state or on the board of directors of a large company”, the Federation says.

The IFJ campaign will focus on 5 countries – Palestine, Peru, Philippines, Somalia, Ukraine – countries where the level of impunity for abusing, jailing, attacking and killing journalists has been high, taking into account the levels of violence against journalists in the respective countries and the systematic failure of the authorities to fight impunity.

Regarding media independence and press freedom, Ukrainian national media are owned by oligarchs that makes journalists’ work complicated and hard. During the last presidential election, several journalists reported to the National Union of Journalists (NUJU), an IFJ-EFJ affiliate, that they had been the target of attacks, threats, pressure to disclose their sources, constant surveillance, not to mention the constant manipulation of information.

In 2014, Ukraine suffered a crisis that had started in November 2013, following pro-European street protests. In March 2014, Russia annexed Crimea. This led to the war in Donbass, between Ukraine and separatists which are supported by Russia and organized in so called Donetsk People’s Republic and Luhansk People’s Republic.

At least 13 000 people died, including civilians and soldiers, around 15 000 were wounded and in Ukraine, up to 150 people disappeared. including media workers, according to the UN Office of the High Commissioner for Human Rights (OHCHR). This war is still going on. At least 6 journalists and 2 technicians have been killed.

During the Euromaidan protests (November, 2013-February, 2014), the Ukrainian authorities of that time, led by President Victor Yanukovych, violently suppressed pro-European street protests. According to NUJU, 271 journalists from Ukrainian and international media were severely beaten, mainly by police. Although 5 years have passed since then, most crimes remain undisclosed and in impunity. The case of Vyacheslav Veremiy, who was murdered in February 2014 is indicative.

Veremiy covered serious social issues, conducted journalistic investigations, and was a correspondent of the Ukrainian newspaper “Vesti”. During the Euromaidan protests Veremiy was regularly reporting at the epicenter of demonstrations and was injured in the eye. On the night of February 19, 2014, Veremiy and his colleague drove home from work by taxi. On one street in the center of Kiev, he spotted armed mercenaries wearing camouflage and masks and tried to photograph them from the car. Armed people attacked the car, began to smash it, and pulled out the driver and passengers. The driver and the other passenger escaped after the beating, and Veremiy was severely beaten and shot in the back.

Police officers present on the spot remained aloof. One organizer of the murder is in prison. Other participants remain unpunished. His widow, Svetlana Kirillash declared: “Every story passed deep through himself. He worried about Ukraine, our future, so in January and February 2014 did not leave Euromaidan, even after thefirst injury. Admiring work, he often forgot about his own safety, unfortunately, as in February 2014. We live in a difficult, crucial time, but the memory about our heroes who gave their lives for the sake of Ukraine’s future should inspire and empower us”.

On 20 June 2019, Vadym Komarov, a Ukrainian regional reporter, died as a result of an assault on 4 May in Cherkasy. The journalist was beaten to death by unidentified men one day after he posted on Facebook that he was working on alleged corruption in sports schools. He was known for his investigations and his hard-hitting reporting on local authorities.

NUJU says that the police have refused to inform them about the current progress of this case.

The Secretary of NUJU, media lawyer Valeriy Makeev, worked with Vadym Komarov on several projects. He declared: “An iconic journalist has passed away. Too early. He did not finish everything; he did not investigate everything. His live broadcasts and breaking news from Cherkassy region collected tens of thousands of views. Viewing “Komarov News” and reading his materials had become an integral part of the life of many Cherkasy citizens (and not only!).Not everyone liked his sharp comments, his irreconcilable attitude with corruption and arbitrariness, and this was an integral part of freedom of speech, which has now suffered significant losses.No murderers were found or punished. The society should get hope for an effective investigation into Vadim’s murder”.

Georgiy Gongadze remains the biggest case of impunity case in Ukraine. The Ukrainian journalist disappeared in September 2000, after having written an open letter to the General Prosecutor to file a complaint for harassment from the Security Service of Ukraine. His body was found two months later, in November 2000, decapitated and with acid all over it. Some audio records proved the former President, Kuchma, was involved in the case, as well as the former president of the Ukrainian Parliament, Volodymyr Lytvyn and the former Minister of Interior Kravchenko. Nobody has been punished to date.

The President of the National Union of Journalists of Ukraine Sergiy Tomilenko, who is also a member of the EFJ Steering Committee, said: “Full impunity for crimes against journalists provokes new attacks. An example of this is the murder of regional investigative journalist Vadym Komarov. He was the victim of attacks twice, but the attackers did not suffer any punishment. A positive step by the authorities is the announcement of parliamentary hearings on journalists’ safety in Ukraine on November 6, 2019. NUJU has been demanding this for 2.5 years. We hope that this will draw the attention of the authorities to the need for safety for journalists in Ukraine. And the need for regular public reports by law enforcement agencies will stimulate the effective investigations into cases involving attacks against journalists”.

“With at least 16 journalists murdered and no convictions for these acts, Ukraine has a record impunity rate in Europe. We call on the Ukrainian authorities and the international community to take this situation seriously. This constant pattern of total impunity cannot continue,” said EFJ President Mogens Blicher Bjerregård.

“According to our monitoring on the Council of Europe Platform for the Protection of Journalism, since 2015, we have recorded at least 36 cases of impunity for the murder of journalists in Kosovo, Ukraine, Russia, Turkey, Azebaijan, Montenegro, Serbia, Malta and the United Kingdom. This is intolerable. It’s an incentive to commit more murders!,” said EFJ General Secretary Ricardo Gutiérrez.

We use cookies to ensure that we give you the best experience on our website. If you continue to use this site we will assume that you are happy with it.Ok