EFJ and partner organisations call on governments to end impunity 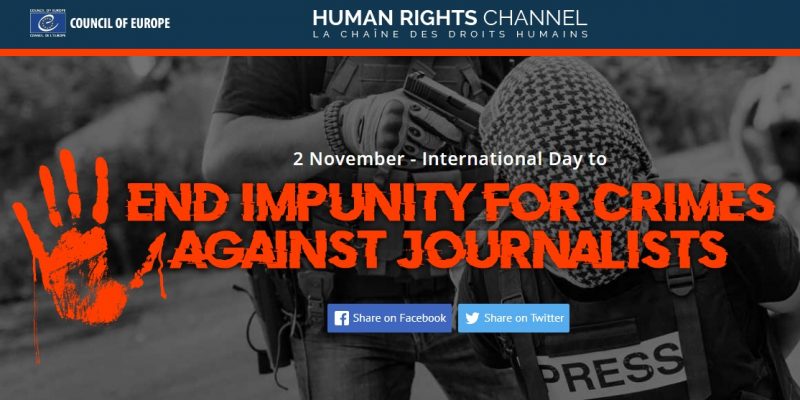 
Ahead of the International Day to End Impunity for Crimes against Journalists, a UN-recognized day observed annually on 2 November, twelve partner organisations of the Council of Europe Platform to Promote the Protection of Journalism and Safety of Journalists call on governments to ensure that crimes against journalists are not carried out with impunity.

Earlier this week, the case of courageous Maltese investigative journalist Daphne Caruana Galizia was moved to the Council of Europe’s category of journalists killed with impunity. The three men charged with her murder have yet to be brought to trial, while those who masterminded her assassination remain at large.

She is one of 36 journalists whose cases remain open on the Council of Europe Platform. As many as nine of the cases, including those of Dada Vujasinović and eight Serbian and Albanian journalists, date back more than 20 years. The platform partners call for thorough investigations to be carried out with the aim of bringing those responsible for their deaths to justice.

At the same time, the undersigned partner organisations welcome the recent indictment of four suspects, including the alleged mastermind, of the murders of Slovak journalist Ján Kuciak and his fiancée Martina Kušnírová. However, they emphasise that all those involved in the crime must be convicted in order to fully prevent impunity. Slovak authorities must investigate and take action against associated wrongdoing, including the mass surveillance of journalists prior to Kuciak’s murder, and take concrete steps to protect journalists’ safety in the future.

In the 2019 Annual Report of the Council of Europe Platform, the partner organisations expressed concern that “a climate of impunity has started to take hold in parts of Europe”. They said that “the swift completion of transparent and effective investigations and prosecutions leading to the punishment of all those found responsible […] is essential if public trust in states’ commitment to protecting the safety of journalists and the rule of law is to be restored.”

The partner organisations call on Council of Europe member states to fully implement the Committee of Ministers Recommendation on the protection of journalism and the safety of journalists and other media actors, which includes guidelines related to addressing impunity.