EESC report points out decline of media freedom in Europe 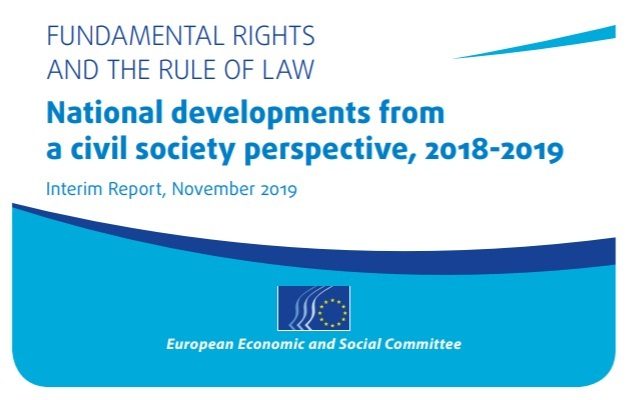 
The European Economic and Social Committee (EESC), which is composed of three groups representing the EU’s trade unions, employers’ organisations and diverse civil society organisations, issued an interim report on fundamental rights and the rule of law in Romania, Hungary, Poland, Austria and France. This report highlights serious concerns regarding freedom of expression and the media as put forward by civil society in the targeted countries.

Building on this newly published report, the EESC held in Brussels on 5 November a high-level conference on “Fundamental Rights and the Rule of Law – Trends in the EU from a civil society perspective” to signal the urgent need to involve civil society in promoting a culture of the rule of law, amid a growing number of reports on breaches of the core EU values across Europe.

This was the first EESC conference dedicated solely to this major topic, which will be one of the priorities of the new European Commission. It was organised by the EESC Group on Fundamental Rights and the Rule of Law (FRRL) and was attended by the EFJ General Secretary Ricardo Gutiérrez who insisted on the urgent need for EU Member States to improve journalists’ safety and working conditions by fully implementing the 2016 Council of Europe Recommedation on the Protection of Journalism.

The newly published interim report compiled by the FRRL Group, following the first country visits the Group had undertaken in 2018 and 2019, summarises the concerns of diverse civil society organisations, media and legal professionals and human rights institutions interviewed by the Group. Regarding the media, the report mainly points out serious concerns about media pluralism, political interference, harassment and threats, a global decline of freedom of expression and the issue of hate speech:

Media pluralism. “The media landscape varies in the countries visited, however challenges to pluralism of the media appeared in various forms in all the countries visited – which have seen over the last years at best a stagnation or more generally a downward trend in the listing of the annual World Press Freedom index of Reporters without Borders. The economic concentration and the politicisation of the press were common concerns, shared for example in Austria, where media representatives were wary of the reform of national public service broadcaster whose Board of Trustees appointed by politicians already exposed it to political influence. In Hungary, these concerned were associated with the establishment of the ‘Central European Press and Media Foundation’ media conglomerate.”

Political interference. “According to testimonies received, pressure on the independence of the media often took the form of the authorities’ direct or indirect influence on the media market, through advertising, public financing, or shareholding of media outlets. In Hungary, the bulk of advertisements seems to go to media outlets that are close to the government. In Poland, a similar trend was exposed, with an apparent drying-up over the last years of commercial advertising benefiting media seen as critical of the government.”

Judicial harassmant and threats. “A more worrying development that the EESC delegations could hear is the multiplication of judicial harassment or direct threats and attacks against journalists. In Poland, an estimated twenty lawsuits are pending against news outlets. Politicians seem to regularly call journalists “traitors” and some advocate for a “re-polonisation” of foreign-owned media outlets. In Austria, media representatives gave examples of direct challenges of the journalists by the interviewees themselves, and of online harassment campaigns. In France, media professionals explained the regular discrediting they are now facing (the so called “media bashing”) by many politicians. They also mentioned examples of violence by the police and demonstrators against journalists during the “yellow vests” protests.”

Lack of transparency. “Another fear put forward by media actors during the missions challenges in the areas of the right to information and transparency. In Austria, the absence of a law on the right of access to information – a unique case in the EU – was considered as particularly problematic. In addition, media actors presented other challenges like the existence of bribing of media outlets and journalists and the fact that the independent press coverage was limited in rural areas. In Poland, journalists regretted that many public authorities refused to grant access to information, including by avoiding to invite some press representatives to press conferences and to give them interviews.”

Declining freedom of expression. “The pendant of the right of access to information, freedom of expression, was also seen as being endangered in several countries, including in a country like Poland where participants considered that this right was appropriately protected in the law. Some examples were indeed given of pressure and disciplinary procedures imposed on judicial actors who had used their right to freedom of expression in support of an independent judiciary or who had led educational activities in the area of the rule of law. In Hungary, the authorities’ interference was also seen in the area of academic freedoms, including through a stricter control over funding. In France, media actors feared that the law against the manipulation of information, aimed to combat the propagation of fake news and anti-cyber hate speech, could have limiting effects on media freedom.”

Hate speech. “The EESC delegations also heard about the media being used as a tool to stigmatise the civil society, the opposition, or to amplify hate speech against some groups. In Hungary, CSOs expressed their difficulty to have their voice considered in the mainstream media. Those who are seen as critical of the government generally face a negative treatment in the press. By labelling some CSOs and other actors like academics as enemies, media close to the authorities also prevent the treatment of topics considered as too sensitive, which block any possibility for an appeased national dialogue. In Austria, several examples were given of the press – and in particular free newspapers – spreading racist and anti-Muslim political discourses. The phenomenon was all the more worrying that documentation and reporting of hate speech seems particularly low in that country. Online media were seen as particularly conducive of hate speech and verbal violence against many groups, notably in Austria and in France.”