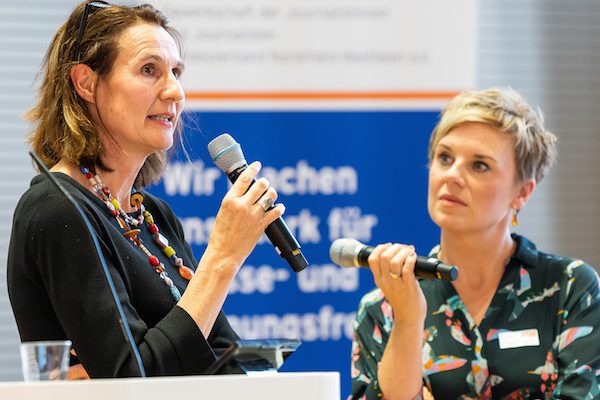 “Stand up for free independent media, Europe needs journalism”, says Renate Schroeder, Director of the European Federation of Journalists (EFJ), with a passionate appeal to politicians and media representatives at the start of the 16th Journalists’ Day of the regional association of the Deutscher Journalisten-Verband of North Rhine Westphalia in Dortmund.

The German Journalists’ Association (DJV-NRW) has invited about 500 women journalists* to the meeting under the motto “The future of journalism – now or never”. In his welcoming speech, Chairman Frank Stach invoked the innovative spirit of the early journalists and publishers and encouraged all members and journalists’ students, who had also been invited: “We have to be the innovation drivers. Get smart, look ahead and network.”

“Quo vadis, Europe,” asks Renate Schroeder at the beginning of her presentation. She said that journalist must fight together in Europe for an independent professional journalism seen as a public good “How European states react concretely to the brutal killings and attacks on journalists will determine not only the future of the press, but also the future of democracies. Killings are the most extreme, most visible way to silence journalists. But there are other, less visible threats to the freedom and safety of journalists in Europe,” said Schroeder. She reports about the Council of Europe Platform for the protection of journalism and safety of journalists, which reports a total of 638 alerts, 14 of them from Germany.

Enormous challenges are also disinformation and political trolls that undermine the basic values of the EU from within, she added. They could only be countered by “quality journalism” and, above all, a new public recognition of the importance of journalism as a public good. Schroeder welcomes the fact that the EU Commission has already adopted a higher budget for media projects, also to promote monitoring and media literacy. The “self-regulation of digital media” is an important EFJ project with financial support of the European Commission, in which five press councils including the German Press Council and two universities participate.

But the question is whether the new Commission headed by President Ursula von der Leyen has the political will to protect freedom of the press in Europe.

In the following discussion moderated by Andrea Hansen, Deputy DJV-NRW Chairwoman, Renate Schroeder gave several best practice from Europe: She outlined the advanced public subsidy system for media in the Nordic countries, including for freelance journalists* and innovation for local media. Trade unions in Europe inspire each other, be it on new funding models, organising, promoting gender equality and diversity and fighting female online harassment. The Danes, in particular, promote their young talents and quickly get young people into positions of responsibility in the trade unions. She also referred to a pilot project supported by the European Commission called ‘Stars4 Media’, a training programme for young media professionals to promote media innovation and cross-border reporting in Europe.

The meeting also sent a strong message of solidarity to journalists who had been threatened by the right-wing Party NPD, who had organised a demonstration  in Hanover against journalists researching the milieu of neo-Nazis. At first, the demonstration was rejected because of “immediate danger to public safety”. Then, on Friday, the administrative court in Hanover granted an application by the NPD and lifted the ban. The assembly showed “intimidating tendencies”, but a counter demonstration had been much larger.

More than forty experts from the fields of journalism, higher education, business and politics participated in workshops and discussed actual themes.  Algorithms and artificial intelligence, opinion power and “fake new”s, how to fight hate speech, business and new work models as well as new possibilities for journalism and PR with chat-bots, AI and augmented reality, concepts for the radio of the future, working in TV production today and co-working as an opportunity in everyday journalistic life were all discussed at this vibrant Journalists’ Day. Participants of the event were journalists, media workers, interested students and career starters, DJV members and non-members.