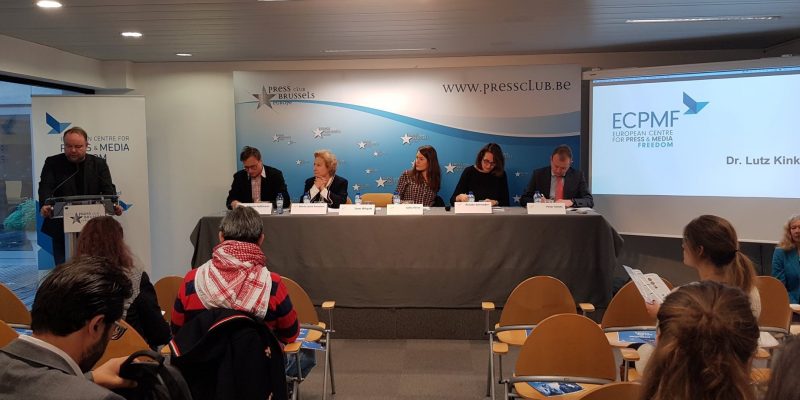 The European Centre for Press and Media Freedom (ECPMF) launched its Press Freedom Police Codex on 4 December in Brussels. The Codex formulates in eight clauses how the police and journalists can work amicably together. The clauses are based on research into areas of conflict between the two professions from all over Europe. It addresses issues of police violence, surveillance, accreditation, protection of sources and confiscation of journalistic materials. With the launch of the  Codex, ECPMF aims to provide guidelines, establish and continue a dialogue between journalists and the police, to help the two professions work together more smoothly.

The Belgian representative of the European Confederation of Police (EuroCOP), Peter Smets, commented on the Codex adding this: “Due to the increase of violence in our society, journalists and police officers face the same challenges. This is a wake-up call for better communication. At the end of the day, we all want to come home safely.”

The Codex is a joint effort by ECPMF and the European Federation of Journalists (EFJ), Index on Censorship, Osservatorio Balcani e Caucaso Transeuropa (OBCT), Ossigeno per l’informazione (O2), and South East Europe Media Organisation (SEEMO). Together, they have pooled their research and experiences to produce eight guiding clauses that can inform the work of police and journalists. The points are as follows:

While ECPMF acknowledges that the relationship between journalists and the police is difficult, it is important to build a dialogue to encourage mutual respect, the upholding of human rights to nurture an environment in which press and media freedom can thrive.

“Everywhere you look you find the same problem: in the turmoil of protests, journalists are hindered in their work. Sometimes they are even attacked. The Press Freedom Police Codex is designed to give police and media professionals a clear set of guidelines on how to safeguard press and media freedom,” said ECPMF’s Managing Director, Lutz Kinkel. “We hope the clarity and practical usefulness of the Codex will help to minimise inappropriate clashes between police and journalists.”

EFJ Director Renate Schroeder said: “The public, including the media and in particular journalists needs to have confidence in its police. This is only possible when there is an open and collaborative relationship between the police and the media.  Dialogue and training between both groups about its respective role is ever more urgent. Therefore, we welcome the code and we welcome the dialogue with the police, and in particular with the police union, Euro-COP.”