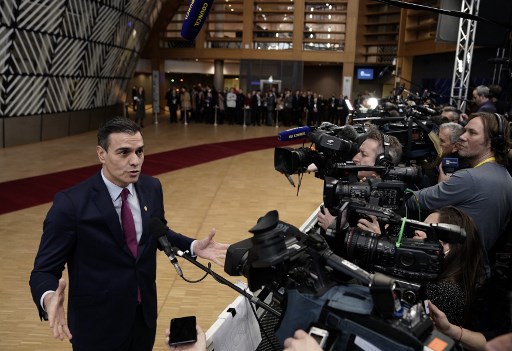 
The European Federation of Journalists (EFJ) joined today its Spanish affiliates FSC-CCOO and FAPE in condemning the increasingly common practice of no-questions-asked press conferences, in Spain.

On Wednesday, Pedro Sanchez (our picture), secretary general of the PSOE and candidate for investiture as president of the Government, invited journalists to attend a press conference, after confirming the King’s order to try to form a government and thus be invested president. Sanchez only allowed two questions, which was strongly criticized by journalists present.

The Spanish Secretary of State for Communication, Miguel Ángel Oliver criticized journalists covering la Moncloa, the seat of government, for having “an unhealthy tendency” to ask questions and for being “activists. “There should be no right to get answers,” he said. “Journalists are insatiable. Do the questions have to be answered every time? Politically, no.”

FSC-CCOO Group of Journalists criticized “the obscurantism and lack of transparency to which the leaders of some official cabinets seem to be dedicated, starting with the Secretary of State for Communication.”

“Press conferences without the right to questions or with limits that are beyond reasonable, as happened yesterday, is a way to deny citizens the response to their concerns and problems,” said FAPE in a statement.