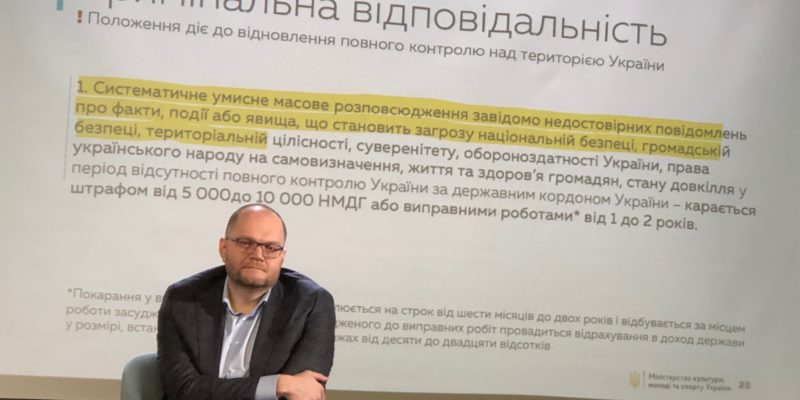 On January 20, the Ukrainian Ministry of Culture, Youth and Sports has unveiled a draft law on combating disinformation and regulating media activity.  According to the minister of Culture, Volodymyr Borodyansky, the text aims to respond to Russian disinformation. However, the journalistic community believes that this initiative is likely to be used as a tool for harassing Ukrainian journalists. In particular, the Nation Union of Journalists of Ukraine (NUJU) warns that the law would legalise state interference in the journalistic profession and restrict media workers’ rights.

The document outlines new rules on media regulation and journalistic activity. It foresees criminal charges for spreading disinformation with huge fines (up to 350,000 euros) and 7 years in prison.

“If this law passes, journalists will be required to hold a professional press card from a state-sponsored organisation (Association of Professional Journalists of Ukraine); media content will be monitored by a Special Commissioner who will implement a policy of fines, blocking and sanction; a Trust Index based on criteria developed by the Special Commissioner will be introduced; the status of a professional journalist will be granted and denied in accordance with the Code of Journalistic Ethics; and the media will be required to publish official identification information,” explains NUJU President Sergiy Tomilenko, alerting on the consequences on the right and freedom to inform that such global control may have.

The European Federation of Journalists strongly reacted against such legislation: “The government must strictly respect journalistic self-regulation and autonomy. The state should create conditions for this process avoiding any governmental interference and not depriving journalists of their rights. The EFJ strongly rejects any proposal where the state would regulate journalistic activity and impose any restriction on journalists”, reacted Ricardo Gutiérrez, EFJ General Secretary.

The draft law was publicly debated between Tomilenko and Borodyansky during the presentation on January 17. “This law is a gateway to state intervention in the activities of Ukrainian journalists. Licensing journalistic activity through the issuance of special press cards has nothing to do with Russian aggression. The priority of Ukrainian officials should be to ensure the physical safety and economic independence of journalists. We have not seen the results of the government’s activities in these directions yet,” said Sergiy Tomilenko. The NUJU strongly rejects the bill as it currently stands.

The draft law will be tabled by the Ukrainian government in March 2020.