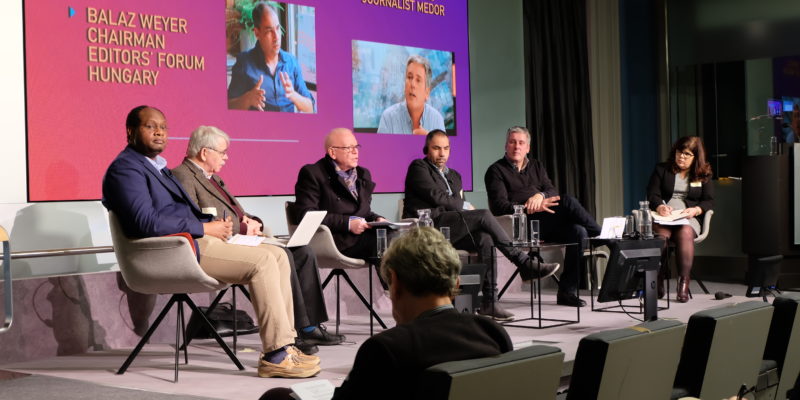 
Are press councils the last defences against the falling confidence in journalism? On the occasion of its 10th anniversary, the Belgian French press council (Conseil de déontologie journalistique – CDJ) organised a European forum in Brussels, on 21-22 January, to raise awareness about the role of press councils. The event addressed in particular, on a panel, the stakes of ethics dealing with political interference and pressure on journalists.

Threats on journalists are increasing in Europe under various forms while greatly impacting media freedom, reminded Ernest Sagaga, Head of Human Rights at the International Federation of Journalists. The Council of Europe (CoE) platform for the protection of journalism and safety of journalists listed more than 500 media freedom violations in Europe since 2015, ranging from physical attacks, death threats to murders.

“Death threats too often became a reality with 49 killings in 2019, mainly for exposing corruption,” said Sagaga.

Belgian investigative journalist Philippe Engels is one of these journalists targeted for his journalistic work on corruption. For the first time in public, he talked about what he has been through, meaning death threats, shadowing, threats of lawsuit, to name a few. “It has always been a kind of taboo for me, as I was fearing for my family,” he said.

Correlation between negative experiences and self-censorship

In its study “Journalists under pressure”, the CoE surveyed 1000 European journalists and identified the pressure as well as their impact on journalists’ work and life. Stress and anxiety on journalists’ partners and families are the main psychological impact of interference.

The report also found that there is a correlation between negative experiences (such as physical assaults, cyberbullying, political and police interference, judicial harassement) and self-censorship. Journalists responded that unwarranted interference encouraged them to be selective about what items to report (33%); to cover in a less controversial manner (30%), to tone down (31%) and even abandon (25%) sensitive and critical stories. Artemiza Tatania Chisca, CoE Head of Information and Media Department, announced the publication in Spring 2020 of a follow-up qualitative study, mainly looking at resistance and resilience mechanisms of journalists.

In Hungary, a country where journalists and media are suffocating because of political control over the market, the press council (called “Editor’s Forum Hungary) was created in 2012 as a result of the adoption of the controversial media law. It appeared to be the last support for journalists under pressure:

“When the pressure is growing, you need a safety net. Without strong journalists’ trade union or a respected organisation, it is difficult to establish solidarity and the feeling that one belongs to something bigger. The press councils plays this role,” said Balaz Weyer, chairman of the Editor’s Forum Hungary.

Self-regulation as a way to restore trust in journalism

Another challenging mission press councils have to take up now is the restoration of trust between journalists and the audience. “I see self-regulation as the insurance for the quality of the media,” Balaz added. It is also what foster the creation of the press council in France (Conseil de déontologie journalistique et de médiation – CDJM) in December 2019. “We acknowledged that there is a number of misguided ways in the French news coverage. With this council, we hope to demonstrate the usefulness of such self-regulatory body in order to get away from the idea that journalists are accountable to their peers only,” said journalist Pierre Ganz.

However, in some countries like France, these bodies don’t bring the entire profession together. Critics argued that ethics cannot be separated from media ownership. Others warned about the manipulation by financial and political circles which started using press councils’ decisions to attack journalists and take complaints to court.

At the European level, the European Federation of Journalists (EFJ) has been promoting self-regulation as the best antidote against disinformation and loss of confidence in journalism. The EFJ is leading an EU-funded project with six European press councils, to promote their crucial role in protecting media freedom and encouraging professionalism in journalistic content. But more importantly, despite major differences in their functioning and traditions, it provides them with a platform to exchange best practices and experiences on what works across Europe.