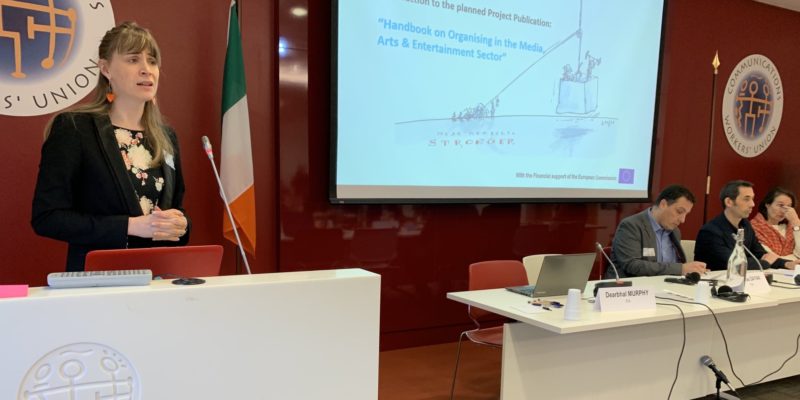 “Was not competition law meant to “control” the big and powerful?” asked Professor Nicola Countouris, University College London, in the opening keynote address on “Re-thinking the competition law/labour law interaction: promoting a fairer labour market, in Dublin last week. The final conference on “Organising and bargaining for atypical workers” organised by the International Actors Federation (FIA) in cooperation with the EFJ, FIM (Musicians) and UNI-MEI (other media workers) brought together over 90 trade union leaders from the Arts, media and entertainment sector.

Together with labour- and competition academics, the European Commission, the OECD and ILO representatives, the federations discussed how to get the balance straight and protect precarious workers with an improved interpretation of competition law and the help of established case law and international standards.

Countouris outlined several European Court cases, ILO standards, the European Charter on Fundamental rights (article 28: right of collective bargain and action) and the recent Council of Europe Ministers’ Committee decision – affirming that article 6§2 of the European Social Charter on the right to collective bargaining applies to self-employed persons like voice over actors, freelance journalists and musicians, and that restrictions based on competition law or commercial law are not legitimate and/or are not necessary in a democratic society.

Very valuable new OECD report with an overview of how various countries are addressing atypical work forms such as freelancing, and detailing the challenges and priorities for the future. #Atypicalwork https://t.co/YxhMuKsbEv

Together with the European Trade Union Confederation, all four federations called on the European Commission to make sure that the fundamental right of collective bargaining for workers and self-employed fall outside the scope of Article 101 (competition rules) of the Treaty of the Functioning of the European Union (TFEU).  The reform of EU competition policy should prevent interference with workers’ and social rights, including the right of association, collective bargaining, strike and workers’ participation. Neither workers nor self-employed should be considered as undertakings under competition law.

The European Commission Work Programme for 2020 identifies the need to improve labour conditions for platform workers, mentioning also access to collective bargaining. Article 19-20 of the adopted Copyright Directive recognise the possibility of collective bargaining mechanisms for authors and performers or their representatives for the purpose of assuring appropriate and fair remuneration. However, this is at the moment challenged by many publishers organisations at national level. The German unions are considering to go to court for that reason. The Dutch just won a court case on the basis that photographers’ fees are not fair in the Netherlands (within the framework of copyright law).

The conference showcased cases from the Netherlands and Ireland where unions can bargain on behalf of freelancers, however within defined exceptions.

The seminar also discussed and exchanged best practice on organising as this is also urgent to influence terms and conditions of freelance workers. The two-year project, which has the support of the European Commission, has allowed some organising tours led by experienced organisers also to EFJ affiliates in the Netherlands and in France. Both Pablo Aiquel and Renske Heddema from the EFJ Freelance Expert Group gave very positive feedback from these sessions helping unions to set clear goals and strategic thinking on how to better organise an ever larger diverse potential membership.

Excellent work done by @beckyunions21 on the ground in #France to better organise journalists, find common problems, common solutions and listen to each other! @SnjCgt @SNJ_national #atypicalwork @EFJEUROPE

An organising Handbook is in the final making and will be distributed to all affiliates. In the last session, all federations agreed that the work must go on on both organising and finding solution:

“We have a great job to do against the chilling effect when employers refuse to negotiate on behalf of freelancers. What we need is a mapping exercise where competition authorities PREVENT collective bargaining”, said Dearbhal Murphy, FIA Deputy General Secretary in the final session.