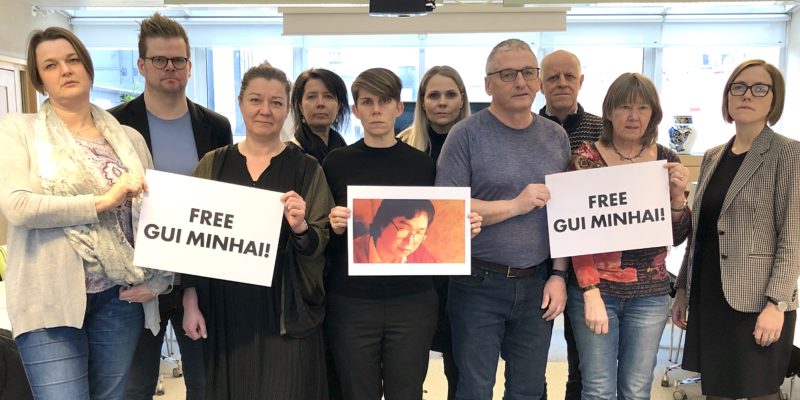 Last week Swedish citizen and book publisher Gui Minhai was sentenced in China to ten years in prison for espionage. The European Federation of Journalists (EFJ) joined its affiliates in Denmark, Finland, Iceland, Norway and Sweden in calling on the Chinese government to free Gui Minhai.

Minhai is a book publisher who was running a publishing house in Hong Kong. He went missing in Thailand in October 2015 and later turned up imprisoned in China on suspicion of illegal business operation – the charges against him changed several times.

According to media reports, a court in Ningbo said on Tuesday 25 February that Gui had been found guilty and would be stripped of political rights for five years in addition to his prison term. The brief statement said Gui had pleaded guilty and would not be appealing against his case. He had been forced to falsely confess several times in public since his imprisonment.

“It is obvious that the real reason behind the verdict is Gui Minhai’s work as a publisher. The imprisonment is a clear violation of the human rights of Gui Minhai,” the Nordic Federation of Journalists said in a resolution. “This is not the first time China uses unacceptable means to try to silence those who stand up for freedom of speech. The actions carried out by the government in China in the case of Gui Minhai is an attack on freedom of expression.”

The five Nordic journalists’ unions condemned the court’s decision and called on the Chinese government to allow Minhai to return to Sweden and to reunite with his family. The EFJ calls on the Swedish government and the European Union to do their utmost in order to get Gui Minhai free.