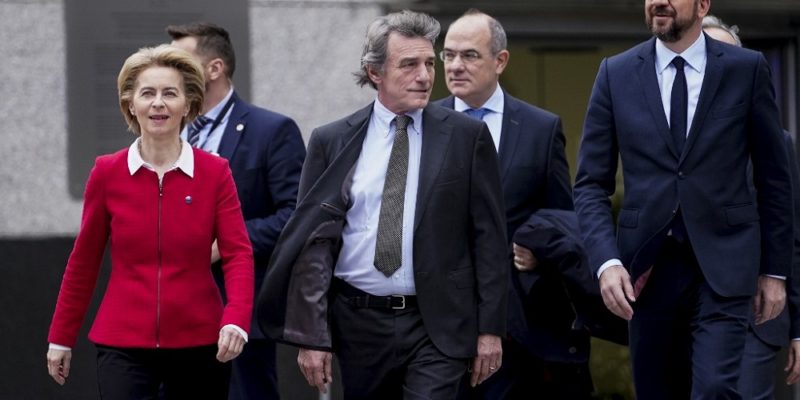 
The European Federation of Journalists (EFJ), the major network of journalists’ organisations in Europe, today called on European leaders to protect free flow of information and ensure that media freedom will be guaranteed as states strive to tackle the COVID-19 pandemic. The EFJ joined together with eight other press freedom bodies and journalists’ organisations to express its profound concerns about the dangers of governments taking advantage of the COVID-19 pandemic to punish independent and critical media and to introduce restrictions on the access of media to government decision making and action.

While recognizing that certain emergency measures are needed to combat the pandemic, EFJ said that such measures must be necessary, proportionate, strictly time-limited and subject to regular scrutiny, in order to solve the immediate health crisis.The groups also stressed that the free flow of independent news is more essential than ever, both for informing the public on vital measures to contain the virus as well as in maintaining public scrutiny and debate on the adequacy of those measures.

Read our letter below or click on this link:

Re: Call for Europe’s leaders to protect free flow of information to tackle COVID-19

We, the undersigned press freedom and freedom of expression organisations, are writing to express our profound concerns about the dangers of governments taking advantage of the Covid-19 pandemic to punish independent and critical media and to introduce restrictions on the access of media to government decision making and action.

The free flow of independent news is more essential than ever, both for informing the public on vital measures to contain the virus as well as in maintaining public scrutiny and debate on the adequacy of those measures.

In this respect we support the joint statement put out by the three global and regional special rapporteurs for freedom of expression, David Kaye (U.N.), Harlem Désir (OSCE) and Edison Lanza (OAS), that the “right to freedom of expression, ……, applies to everyone, everywhere, and may only be subject to narrow restrictions”.

While we appreciate that certain emergency measures are needed to combat the pandemic, all such measures must be necessary, proportionate, temporary, strictly time-limited and subject to regular scrutiny, in order to solve the immediate health crisis. Unfortunately, numerous governments around the world are already using the pandemic to claim excessive powers that can undermine democratic institutions, including the free press. These dangerous developments could easily outlive the current health crisis unless we act urgently to stop them.

This week, the Hungarian government is demanding an indefinite extension of the state of emergency and the power to impose prison sentences of up to five years on journalists and others for promoting false information related to COVID-19.

Our organizations are acutely aware of the dangers of disinformation and how it is used by unscrupulous groups to spread panic and division. However, this does not justify draconian powers that risk being used against journalists whose work is indispensable in protecting public health and ensuring accountability.

It is little surprise that Hungary, with its record of undermining media freedom, should be the first EU member state to make such an extreme and opportunistic power grab. The few remaining independent media outlets in the country are regularly attacked and accused of spreading “fake news” for raising simple questions about the government’s preparedness and strategy for tackling the pandemic. If approved, this new law would grant the Hungarian government a convenient tool to threaten journalists and intimidate them into self-censorship. We fear this is a step toward the complete repression of media freedom in Hungary that could outlive the pandemic.

Were this law to pass it would set a fearful precedent for other European Union member states tempted to follow Hungary’s example – troubling signs exist in other states as well – and do untold damage to fundamental rights and democracy as well as undermining efforts to end the pandemic.

Secondly, our organizations are also concerned about the proliferation of enhanced surveillance measures introduced to monitor the spread of the virus. While we understand the potential benefits, the use of surveillance must have proper oversight and be clearly limited to tackling the pandemic. Unchecked surveillance endangers privacy and data rights, while journalists’ ability to protect sources is undermined and self-censorship rises.

Thirdly, our organizations are concerned about media access to government officials, decision makers, medical experts and those on the front line of the pandemic. Many countries have introduced restrictions on freedom of movement which we insist must not be used to prevent media from bearing witness to the crisis.

At the same time many governments are restricting access to officials by reducing the physical presence of journalists to press conferences. Slovenia and the Czech Republic for example announced ending them altogether. Such measures must not be allowed to restrict media scrutiny of government.

We are in the early stages of the pandemic where, for the most part, governments and media are cooperating closely as they struggle to respond to this unprecedented threat to public health. They both have a duty to ensure the public are fully informed and the response to the pandemic is as effective as possible.

However, we are acutely aware that as the crisis persists, the death toll mounts and as widespread job losses and a certain global recession loom, the actions and decisions of government will come under intense examination. The temptation for some governments to abuse new found emergency powers to stifle criticism will, in some cases, be overwhelming. This must not be allowed to happen.

In a period when our citizens’ fundamental rights are being suspended around Europe, the need for media scrutiny to ensure no abuse of these new powers are stronger than ever.

We therefore call on you to use the power of your offices to ensure that fundamental human rights and press freedom will be guaranteed as the European Union strives to tackle the COVID-19 pandemic.

In particular we ask you to