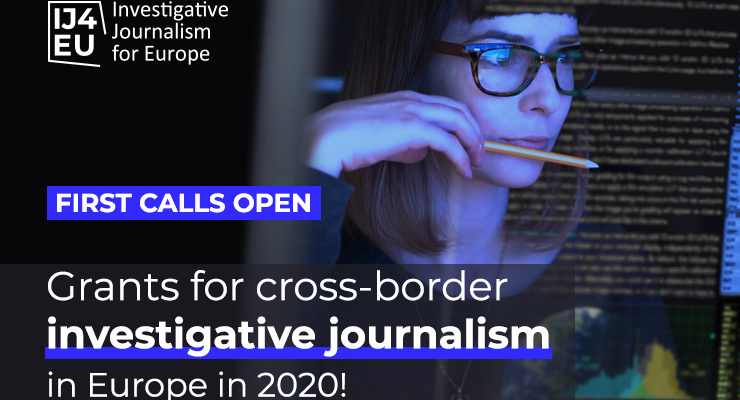 €1 million euros for projects in Europe in 2020

IJ4EU’s Investigation Support scheme will provide grants of between €5,000 and €50,000 to new cross-border investigative projects, including those that have recently begun as well as new phases of existing projects. The deadline for applications is June 14. A second call under this scheme is expected to open in August. See full information and FAQs.

Separately, IJ4EU’s Publication Support scheme will provide grants of up to €6,250 in short-term support to ongoing cross-border projects that need funds to complete or publish their stories. Applications will be considered on a rolling basis starting today, May 5, until September 18. Successful applicants will be informed of a decision within four weeks. See full information and FAQs.

In total, the IJ4EU fund will provide €1 million in direct grants to support cross-border investigative journalism in the public interest in 2020. Approximately €800,000 will be distributed through the Investigation Support scheme and €200,000 through the Publication Support scheme. (Read more about the IJ4EU fund and why we’re dedicated to supporting investigative journalism.) The grants are a continuation of IJ4EU’s successful pilot year in 2018, which funded 12 cross-border investigations.

The eligibility criteria are the same for both schemes. Applications must be submitted by teams based in at least two EU member states or at least one EU member state and one official candidate country. UK-based journalists will still be fully eligible for the 2020 IJ4EU grants. In addition, the projects (whether proposed or ongoing) must focus on topics of cross-border relevance. Investigations on all topics will be considered.

Teams of freelance journalists, staff journalists, and media organizations, or any combination of these, are equally welcome to apply. Teams working in all types of media – including print, broadcast, online media, documentary filmmaking, and multi-platform story-telling – will be considered. Projects must aim to be published by media outlets in at least two countries.

IJ4EU grants may be used to cover nearly any type of cost necessary for the production of journalistic content. This includes salary and human resource costs for both employed journalists and freelance journalists, research costs, travel costs, translation costs, and administrative costs.

Grants under the Investigation Support scheme are awarded by an independent jury led by Süddeutsche Zeitung Editor-in-Chief Wolfgang Krach, a leading figure in the Panama Papers and Paradise Papers investigations and who previously chaired the IJ4EU jury in 2018. Projects under the Publication Support scheme are selected by EJC experts to allow for a swift and rolling response to grant applications of projects already underway. Read more about the selection process and criteria.

Full details about both funding schemes and how to apply, as well as information about past funded projects, can be found on the IJ4EU website. Read our FAQs about applying.

The IJ4EU fund is committed to providing support to investigative reporting at a crucial and challenging time for journalism and the media. Investigative journalism remains as important as ever during the ongoing public health situation.

IJ4EU (Investigative Journalism for Europe) is a fund to support cross-border investigative journalism. We provide grants to teams of journalists in Europe investigating topics of public interest.

The IJ4EU fund is managed by a consortium of three organisations: the International Press Institute (IPI), the European Journalism Centre (EJC), and the European Centre for Press and Media Freedom (ECPMF). IPI leads the consortium and manages the Investigative Support scheme. EJC manages the Publication Support scheme. ECPMF will announce a new prize for cross-border investigative journalism in late summer.

The IJ4EU programme is co-funded as a Preparatory Action by the European Commission (DG Connect), by a grant from the Foundation Open Society Institute in cooperation with the Program on Independent Journalism of the Open Society Foundations, and by Fritt Ord. The programme maintains complete independence from donors in the selection of projects and strictly guarantees the editorial independence of all grantees.

We encourage interested applicants to visit the IJ4EU website and our FAQ page on applying. If you still have questions, feel free to get in touch with IJ4EU.