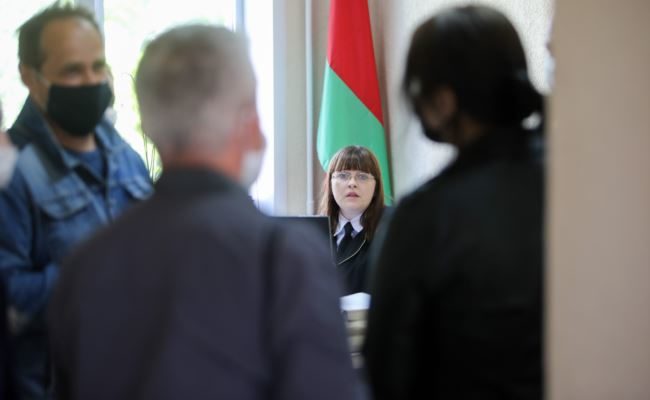 On 11 and 12 May, courts of Mahilou and Hlybokaye, in Belarus, sentenced four journalists, all of them BAJ members, Ales Asiptsou, Mikhail Arshynski, Alexander Burakou and Zmitser Lupach to 10 days of administrative arrest for alleged “participation in unauthorized protests”. They were in fact just covering these demonstrations for their media.

Today, the Leninski District Court announced its decision in the case of Alexander Burakou: 10 days of arrest for participation in an “unauthorized mass event on May 6″. Immediately after the judge announced the ruling, Burakou wrote a cassation appeal.

Also this Tuesday, the Kastrychnitski District Court of Mahilou (our picture) sentenced journalist Ales Asiptsou, a freelance correspondent for BelaPAN, to 10 days in jail for covering the Anti-Parade rally on 9 May. Ales Asiptsou has been on hunger strike from the moment of his detention until the trial.

On Monday, Zmitser Lupach, a freelance journalist from Hlybokaye, was heavily fined and sentenced to 10-day jail term. Lupach was tried for his alleged participation in a mass event. After the trial, he was taken to the hospital due to his health problems.

On 7 May, Mahiliou-based cameraman Mikhail Arshynski had been found guilty of contributing to the Belsat TV news story about protests. “The trial lasted about 30 minutes,” Arshynski told Belsat. “I hardly had the time to read out my speech than the judge decided upon the sentence. He did not even retire into the jury room. We were shocked as such things had never happened before.”

BAJ calls for an urgent review of the administrative cases of these journalists and other persons who have been prosecuted for expressing their opinion. The EFJ joined BAJ in demanding the immediate release of the sentenced journalists.

“Bringing journalists to justice for their professional duties provokes strong protest from the professional community. We consider the use of administrative arrest during the coronavirus pandemic as a punishment to be a special mockery, which puts the health of colleagues in serious danger,” said the BAJ

“This new wave out attacks and imprisonment of freelance journalists in Belarus for doing their job is not only a shameless intimidation against all journalists , it leaves indeed great doubts about the judicial system in Belarus and this even more in times of #Covid-19 when court rooms are not open to the public” said Renate Schroeder, EFJ Director. “We also condemn the high fines of up to 500 Euros for the freelance journalists”.