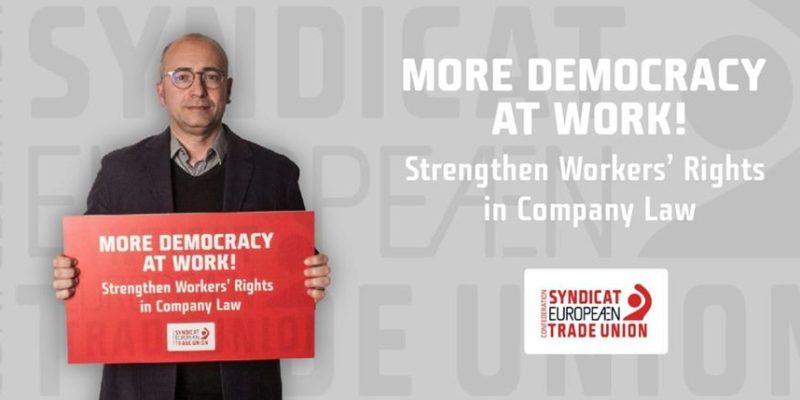 
The European Federation of Journalists (EFJ) welcomes the call by more than 3,000 scholars on 15 May for more democratisation of work. “Democratize firms; decommodify work; stop treating human beings as resources so that we can focus together on sustaining life on this planet,” concludes the call.

“As a sectoral trade union federation, the EFJ supports the European Trade Uunion Confederation’s ongoing fight for the further democratisation of work, so we can only welcome this call for responsibility and mobilisation from the global scientific community,” reacted the EFJ General Secretary Ricardo Gutiérrez. “We fully agree with these prominent scholars: our health and lives cannot be ruled by market forces alone; human beings are not resources; and the COVID-19 pandemic shows why we must democratise work.”

“Workers are not one type of stakeholder among many: they hold the keys to their employers’ success. They are the core constituency of the firm, but are, nonetheless, mostly excluded from participating in the government of their workplaces – a right monopolized by capital investors,” explains the call.

“To the question of how firms and how society as a whole might recognize the contributions of their employees in times of crisis, democracy is the answer. Certainly, we must close the yawning chasm of income inequality and raise the income floor – but that alone is not enough. After the two World Wars, women’s undeniable contribution to society helped win them the right to vote. By the same token, it is time to enfranchise workers.”

“Representation of labor investors in the workplace has existed in Europe since the close of WWII, through institutions known as Work Councils. Yet, these representative bodies have a weak voice at best in the government of firms, and are subordinate to the choices of the executive management teams appointed by shareholders. They have been unable to stop or even slow the relentless momentum of self-serving capital accumulation, ever more powerful in its destruction of our environment. These bodies should now be granted similar rights to those exercised by boards.”

“To do so, firm governments (that is, top management) could be required to obtain double majority approval, from chambers representing workers as well as shareholders. In Germany, the Netherlands, and Scandinavia, different forms of codetermination (mitbestimmung) put in place progressively after WWII were a crucial step toward giving a voice to workers – but they are still insufficient to create actual citizenship in firms.”

“Even in the United States, where worker organizing and union rights have been considerably suppressed, there is now a growing call to give labor investors the right to elect representatives with a supermajority within boards. Issues such as the choice of a CEO, setting major strategies, and profit distribution are too important to be left to shareholders alone. A personal investment of labor; that is, of one’s mind and body, one’s health – one’s very life – ought to come with the collective right to validate or veto these decisions.”

The call also explains how the pandemic shows that work must not be treated as a commodity and why certain sectors must be preserved from the laws of the so-called “free market”.

Finally, the appeal encourages governments to promote a transition from environmental destruction to environmental recovery and regeneration.

“Let us fool ourselves no longer: left to their own devices, most capital investors will not care for the dignity of labor investors; nor will they lead the fight against environmental catastrophe. Another option is available. Democratize firms; decommodify work; stop treating human beings as resources so that we can focus together on sustaining life on this planet,” concludes the call.