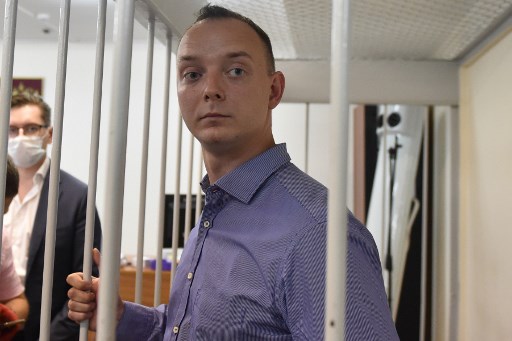 Russian security forces arrested former journalist and current adviser of the head of the Russian space agency Ivan Safronov on 7 July on charges of “treason” for allegedly sharing military secrets. The International and European Federations of Journalists (IFJ and EFJ) join their affiliate, the Russian Union of Journalists (RUJ), in expressing grave concerns over his arrest and the detention of journalists who protested against it.

Ivan Safronov was one of the most prominent and respected journalists reporting on defence issues in Russia. He worked until May 2020 for two major Russian newspapers before becoming an adviser for the Russian space agency Roscosmos.

According to Safronov’s lawyer, Ivan Pavlov, these accusations are related to his work as a journalist. Pavlov claimed that this is “the first time in nearly 20 years that a reporter had been accused of state treason in Russia”.

This version was supported by Roscosmos chief Dmitry Rogozin, who said the arrest cannot be related to his current job because Safronov “does not have access to secret information”.

The prominent journalist pleaded not guilty and may face up to 20 years in prison if found guilty of high treason.

The arrest sparked outrage in Moscow, where dozens of protesters took to the streets to protest. According to media reports, twenty people were detained in the protests.

“The RUJ is extremely concerned about the situation with the arrest of Safronov and the detention of journalists protesting over his arrest. Detentions of journalists during solo protests are against the law. The legal service of the Union will monitor the progress of the process and is ready to assist our colleagues“, the RUJ said.

“We call for absolute transparency in the investigation. We want to know what our colleague’s alleged crime is” said the Journalists’ and Media Workers’ Union (JMWU)