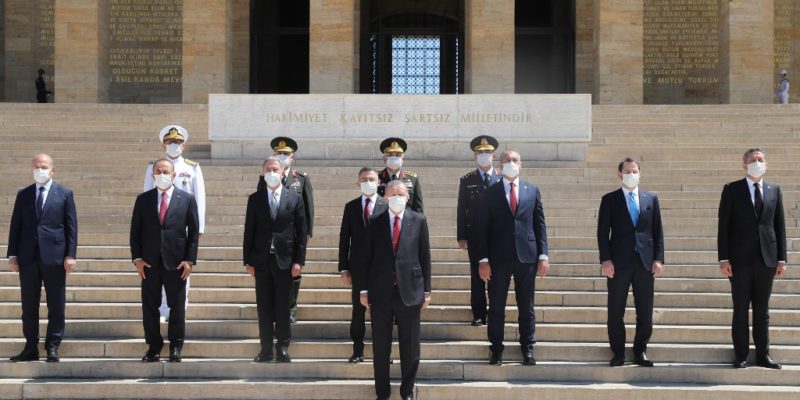 
This article was originally published on 5 August by Nieman Reports, and is reprinted here with the kind permission of the author, Emre Kizilkaya, a 2019 Knight Visiting Nieman Fellow who is currently the editor of journo.com.tr. Original title: “As Erdoğan Cracks Down, Turkey’s Independent Journalists Need Digital Skills and Business Acumen” – “Turkey’s mainstream media has imploded, and it will not come back even after Erdoğan”

Shooting a glance at the uncanny paraphernalia on my desk feels like watching a “Breaking Bad” teaser: A fist-sized rock near my monitor, a half-burnt tear gas canister on the rock, holding a pen, and a handwritten letter from a Turkish fifth-grader next to it.

I keep these objects on my desk as a kind of monument to the perils and the virtues of being a journalist in today’s Turkey. The rock was thrown at the headquarters of my former newspaper, Hurriyet, by a pro-government mob in September 2015 after our critical editorial policy angered President Erdoğan and others in his government.

The same “protesters” returned to the building 10 months later to save us journalists from the hands of machine gun-wielding soldiers who attempted to silence our outlet as their ill-fated coup attempt unfolded. Police had fired the tear gas canister during the rescue operation as we continued our live coverage of the events on our news website.

The pen was a gift to me from a group of American journalism students visiting the newspaper. And the letter, whose story I explained in an article for the Vienna-based International Press Institute (IPI), was written by a schoolboy to thank Turkish journalists for “reporting the truth in an unbiased way” despite all the challenges.

With these memories in my mind last year, I resigned from Hürriyet, which was part of Dogan Media Group, Turkey’s largest independent media group, soon after it was sold to a pro-government conglomerate.

After studying media sustainability as a Knight Visiting Nieman Fellow, I have returned to my new office in central Istanbul, which is the home of our nonprofit platform for next-generation journalists, journo.com.tr, as well as the Media Academy of Turkey’s Journalists’ Union (TGS), supported by the European Union.

The location of this office, where we regularly train, recruit, and chat with younger journalists, is highly symbolic. When I look out my window, I see the Trump Towers and a historic cemetery, where many non-Muslim Ottoman and Turkish notables, including the great Armenian photojournalist Ara Güler, rest in peace.

If I walk into the meeting room of the TGS Media Academy, the view changes to a panorama of the biggest courthouse in Europe, the Çağlayan

Justice Palace,  where journalists regularly visit either to cover a legal case or face charges themselves. Most criminal charges against Turkish journalists are politically-motivated, as stressed in the reports of international organizations.

According to a new report by the  European University Institute’s (EUI) Media Pluralism Monitor, Turkey is currently the only country in Europe where journalists face the highest level of risks in all categories, including basic protections of free speech, market plurality, political independence, social inclusiveness, and media pluralism in a digital environment.

In other words, Turkey is unique because President Recep Tayyip Erdoğan and his administration have been blending various kinds of methods to “tame” the media since 2009, when Dogan and my former newspaper was issued a $2.5-billion tax penalty weeks after it published a story on a corruption case in Germany in which those convicted were allegedly linked to the Turkish government.Since then, Erdoğan’s administration has been jailing journalists like China, shutting down media outlets like Iran, using its cronies to buy off or purchase others like Hungary, subjugating the judicial system and weaponizing defamation laws to intimidate the press like Poland. Meanwhile, Turkey’s pro-government mobs physically assault and social media trolls virtually harass critical journalists in an organized way, like in Russia.

Such moves are almost always accompanied by Erdoğan’s vitriolic remarks targeting journalists, hurling slurs at them like President Donald Trump has been doing.

While the U.S. may still have a functioning system that checks and balances a president with increasingly authoritarian tendencies, Turkey lost most of these democratic protections in the past 20 years that Erdoğan’s Justice and Development Party (AKP) has ruled. Turkey currently ranks 154th out of 180 countries in the World Press Freedom Index, way below Mexico, Afghanistan, Myanmar, and the Central African Republic.

And even “the last refuge” for Turkey’s journalists has come under threat, as I explained to Voice of America. The Turkish president recently vowed to “remove social media platforms” and his administration quickly adopted a new law that would further expand digital censorship. From now on, the digital platforms that refuse to bow down to the demands of Erdoğan will be heavily fined, and their bandwidth will be throttled by as much as 90%. As a result, we may soon see Iraq-style social media shutdowns and China-style VPN blocking becoming routine in Erdoğan’s Turkey.

Due to the severity of multiple threats, Turkey may be among the hardest countries for journalists. But don’t get me wrong: Journalism still resists and survives here. Prominent journalists like IPI executive board member Kadri Gürsel were jailed for their work but they still stick to journalism. Hundreds of young journalists graduate from more than 100 communication faculties in Turkey each year and most of those to whom I talked voice their determination and resilience to serve the public good and provide the citizens a healthy diet of information against all odds.

Journo and the TGS Media Academy are among the new initiatives that support their work and professional development. So far, we have published news stories from 105 freelance journalists — 68% of them are women and 83% are under 40 years old — and paid them more than $30,000 for their work. These pieces focused on key issues for Turkish media, like innovation in local newspapers, data journalism tools, and the challenges faced by reporters who belonged to Turkey’s fragile communities, including women, LGBTI+, and ethnic/religious minorities. Their stories reached more than 191,000 people on average in the first half of this year.

The TGS Media Academy works for capacity building. Some 2,100 journalists have so far participated in more than 200 training sessions on subjects like investigative journalism and media ethics. Dozens of journalists also received legal assistance, psychological support, and benefited from the Academy’s fully-equipped audiovisual studio in central Istanbul, all free of charge.

Overcoming the range of challenges facing journalists in Turkey requires battles on multiple fronts. It includes equipping journalists with digital skills and business acumen, raising awareness and building trust with audiences, and bridging these two groups on a secure platform that journalism can be funded in multiple ways.

We are working to establish such an open-source news platform in Journo. Our dream is to incubate and accelerate hundreds of journalism startups throughout Turkey, from western Turkish cities bordering the E.U. to Kurdish-majority towns in the southeast and on the border with Syria and Iraq. Our roadmap devises self-sustained pop-up newsrooms with a local audience, making censorship impossible and giving the reporters all the tools — free of charge — for sustainable journalism.

For such a journalism initiative, the first problem is obviously digital security and safety, considering impending legal threats. The time I spent at the MIT Media Lab was particularly valuable as I learned how a decentralized, distributed, and uncensorable network for the production and consumption of high-quality news can be designed. The technical know-how I acquired there led me to reset many of my earlier works, including the coding of the new platform, for the better.

The second big threat comes from the tech-led business model transformation of the media, which is deepened by the Covid-19 pandemic. In Turkey, the situation is even worse than for most media outlets in the West. While the government subsidizes its own partisan outlets, the rest, with critical news coverage, display several weaknesses. Most importantly, a large majority of the audience distrusts journalists amid the highly-polarized social atmosphere. And only a few of the country’s best journalists have the required know-how to establish and sustain a digital outlet.

As Journo’s editor and a tutor for TGS Academy, I try to convey to my younger colleagues what I learned during my Nieman fellowship: The economic sustainability of a media organization is increasingly linked to its success in revenue diversification, which reinforces editorial independence.

The problem of journalism in Turkey is actually larger than President Erdoğan and his administration.  If the seeds of quality journalism are not sown today, then these problems are likely to persist in a post-Erdoğan Turkey, too, haunting another generation’s hopes for democracy.

It would be naive to presume that Turkish journalism will magically come back to life. Such a resuscitation requires hard work, consistency, and patience from many actors if democracy is to succeed in the long run. Me and my friends are persuaded that these are deep-rooted problems that can only be solved with a bottom-up approach that would return us to the basics of journalism.

Turkey’s mainstream media has imploded, and it will not come back even after Erdoğan. For the sake of Turkish democracy, it should be replaced not with more centralized media titans that can be seized or bought out by another authoritarian leader, but with a decentralized “journalistic spirit” rekindled in each and every corner of Turkey. With a smart kick-start, dozens and even hundreds of journalism startups, ultimately connected to and financed by local audiences, can pop up in every province of Turkey, countering centralized threats including the government as well as the tech platforms.

Luckily, even in the new age of China-style digital censorship, Turkey’s next-generation reporters shine with a glimmer of hope, shouting out that journalism in this country can indeed rise from the ashes. Being well aware of our limitations and humble means, we are still fueled by the strong belief that it is our humanistic and democratic duty to get them on their feet.