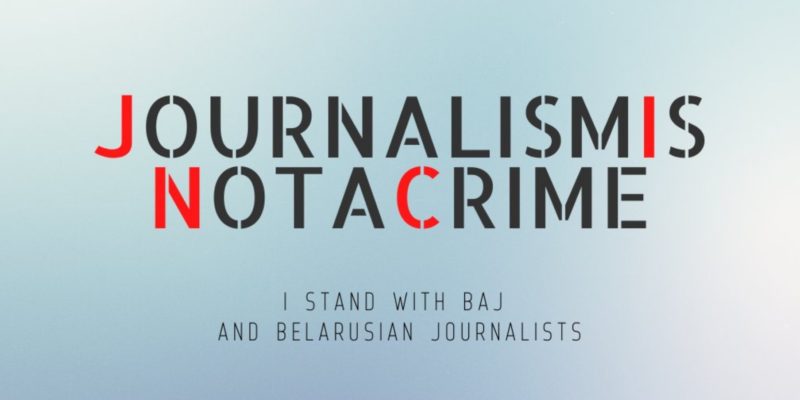 
Dozens of journalists have been intimidated and beaten by security forces in Belarus. Many have been detained. Some are still missing. The European Federation of Journalists (EFJ) reiterates its call for intervention by the international community. In particular, we call on the European Union, the Council of Europe and the OSCE to take urgent measures to stop violence against journalists and citizens who are peacefully demonstrating.

Today, journalists’ organisations from the region (see below) are showing solidarity with the Belarusian Association of Journalists (BAJ), which is monitoring the many press freedom violations in the country. The EFJ calls on its affiliates all around Europe to show solidarity with BAJ and journalists in Belarus and to call on their own national governments to take action.

With the start of the election campaign on May 8, and until August 11, BAJ has registered 133 cases of serious violations of journalists’ rights (detentions, arrests, fines, and beatings). In addition, at least 10 criminal cases have been started against popular bloggers and administrators of Telegram channels.

Dainius Radzevičius (LZS, Lithuania): “Today, more than ever, it is important for the people of Belarus to get accurate and correct information about what is happening in the country. Independent journalists are unable to perform their duties properly due to the actions of the Belarusian government. It is difficult for them to collect and especially disseminate information. Internet blocking and harassment of journalists is reprehensible and must be stopped as soon as possible. We support our fellow journalists in their hard work and we show solidarity with all the colleagues who have suffered. We want them to know that in a difficult situation, they can always expect help here in Lithuania.”

Krzysztof Skowroński (SDP, Poland): “Polish journalists actively supported the flow of independent information in Belarus for a long time. Since 2007, Belsat TV (Belarusian language TV channel formed by a group of Belarusian and Polish journalists) broadcasts from Poland. We express our solidarity to all Belarusian journalists from Belsat TV and other media. We condemn actions taken by Belarusian authorities against journalists and protesters. We also demand the immediate release of all detained journalists including Witold Dobrowolski, SDP member, Grand Press Photo 2020 winner, who is detained in Minsk.”

Krzysztof Bobinski (Society of Journalists, Poland): “The people of Belarus are fighting to defend their political and civic freedoms and their nation’s very independence. Independent journalists are on the front line in this struggle. They deserve our solidarity. Media freedom and freedom of expression are a fundamental right. We journalists are bound to defend this right wherever it is endangered. We appeal to people of good will to support the Belarus at this critical moment!”

Andrei Jvirblis (JMWU, Russia): “Numerous accounts of the circumstances of the arrests of our colleagues and the brutality with which they were carried out show that this is by no means a coincidence or chance, but clearly a deliberate hunt for journalists and the willingness to intimidate them. The almost total lockdown of the Internet is the flip side of the dictator’s fear for all truth and free information.”

Sergiy Tomilenko (NUJU, Ukraine): “It is not a crime for journalists to perform their duties. Mass detentions of journalists in Belarus, beatings by police, and travel bans are all brutal policies that must be stopped immediately by the authorities. The Ukrainian Union expresses its solidarity with the Belarusian Association of Journalists, which helps colleagues on this front line in incredible conditions.”

Serhiy Shturkhetskyy (IMTUU, Ukraine): “In these days we are completely with our Belarusian colleagues. Today, the fate of democracy depends not only on Belarusian journalists, not only in their country, but in the entire post-Soviet space. Therefore, we call on all parties involved to respect the rights of journalists. We are with you!”

Helle Tiikmaa (EAL, Estonia): “The Estonian Association of Journalist (EAL) supports EFJ’s call for international community’s intervention in Belarus to stop violence against journalists and demonstrators. EAL also calls Estonian politicians to put pressure on Belarus. The suppression of press freedom and preventing journalists’ work in Belarus has gone to extreme. EAL supports independent and honest journalism in Belarus and Belarusian Association of Journalists representing freelance journalists. EAL condemns Belarusian authorities repressions against journalists, who work to inform their countrymen and outer world of the events taking place. People have right to be informed. Arresting, assaulting and fining journalists and blocking internet access is not acceptable. At the same time the events in Belarus remind the importance of press freedom and journalists’ independence for democracy in a society. We must remember that these are not self-evident. We must stand for press freedom and journalists’ independence not just under dictatorship, but also in democratic societies. Unfortunately, there are already deterrent examples in EU. We must avoid the repetition of Belarusian events elsewhere.”

Please share our message of solidarity: Journalism is not a crime.

We invite all journalists' unions and associations to show support to @baj_by and Belarusian journalists. I stand with #Belarus. pic.twitter.com/L380TK66aV