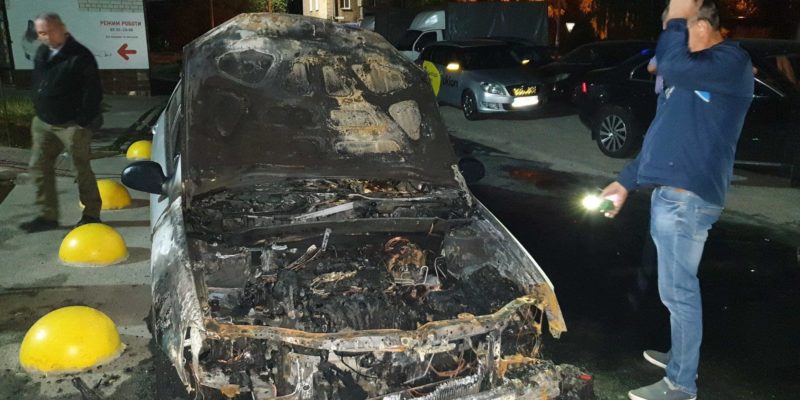 The remains of the car following the arson attack. © MYKHAILO TKACH/FACEBOOK


A group of Ukrainian investigative journalists is being subjected to a campaign of harassment and intimidation, including surveillance and arson attacks.

The International and European Federations of Journalists (IFJ and EFJ), join their Ukrainian affiliate, the National Union of Journalists in Ukraine (NUJU), in urging the authorities to launch a thorough investigation into the intimidation and attacks aimed at muzzling their investigations. The European Centre for Press and Media Freedom (ECPMF) also joined the call backing the journalists.

The Radio Free Europe/Radio Liberty team’s car was set on fire during the night of Monday 17 August. Police found an explosive substance on the wreck of the car, which was completely destroyed.

Earlier this month, the project leader of the Schemes: Corruption in Details” Mykhailo Tkach had reported signs of a break-in and surveillance in his home apartment.

“Schemes” is a joint project of Radio Svoboda and the Ukrainian Public Broadcaster, reporting on high-level corruption in Ukraine. The team was recently working on a piece called Kings of the Road revealing how high-level state officials breaks traffic rules with impunity. During the production of the programme, the journalists repeatedly voiced concerns about being under surveillance.

On 8 August, Tkach had informed police about finding evidence of surveillance measures in his home. Sources had warned him about instructions to monitor him. When police inspected his apartment, they discovered three holes in the shared attic above the apartment and one hole in the kitchen.

However, no surveillance equipment was found. The National Police filed a report for “violation of privacy.” The President of the National Union of Journalists of Ukraine (NUJU), Sergiy Tomilenko, called on the authorities to thoroughly investigate information about the possible wiretapping of the journalists.

The IFJ and EFJ submitted an alert condemning the situation to the Platform to promote the protection of journalism and safety of journalists of the Council of Europe.

NUJU president Sergiy Tomilenko said: “Verbal harassment from high-level officials, attempted wiretapping, arson have all been directed against the journalists. Pressure on a group of journalists who reveal corruption at senior levels is a media freedom emergency. This sets alarm bells ringing for every investigative journalist in the capital and all over Ukraine. We demand that law enforcement agencies involve the best experts from the security services to investigate these cases.”

IFJ General Secretary Anthony Bellanger said: “It is essential that investigative journalists can freely and critically report on corruption and wrongdoing by state officials. Surveillance and the attack against this team are worrisome blows against press freedom that can’t go unpunished. We stand in solidarity with the victimised journalists and call on the authorities to protect them from these attacks.”