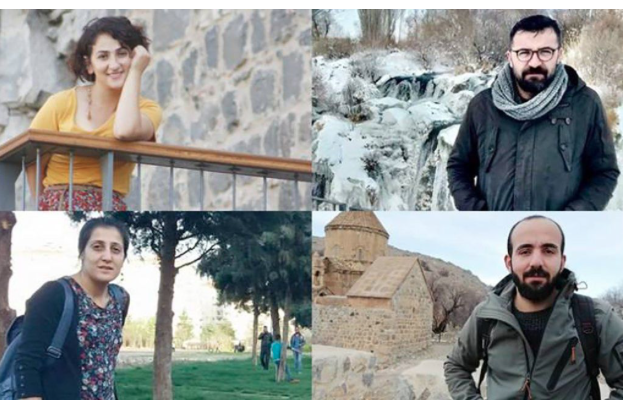 Police detained four journalists in eastern Turkey on 6 October and raided their homes and offices following their reporting on allegations of Turkish security forces torturing two Kurdish villagers and throwing them from a helicopter. The International and European Federations of Journalists (IFJ and EFJ) call for an immediate release of the journalists.

Police detained reporters Adnan Bilen and Cemil Uğur, who work for Mezopotamya Agency (MA), and Şehriban Abi and Nazan Sala, working for Jin News, in the province of Van, located in eastern Turkey, on the morning of 6 October. The premises of MA and Jin News and the journalists’ homes were raided. News agency MA reported that the police did not reveal the reason for the raids and barred the journalists from witnessing the roundups. They also confiscated working devices such as cameras and journalistic material.

The journalists were taken to the Provincial Security Directorate and barred from speaking to a lawyer for 24 hours. On 7 October, their detention period was extended for another four days, according to an update by MA.

The journalists reported that Turkish security had allegedly tortured Kurdish villagers Servet Turgut and Osman Şiban and had thrown them out of a helicopter. One of the victims, Servet Turgut, died from his injuries on 30 September.

The journalists revealed documents confirming their accusations, including a hospital report acknowledging that the two villagers suffered severe injuries due to a fall from a great height.

News agency ETHA reported on Thursday that the Public Prosecutor’s Office imposed a publication and broadcasting ban on the incident.

IFJ General Secretary Anthony Bellanger said: “Journalistic work is essential to uncover state abuses that otherwise remain hidden to the public and, therefore, go unpunished. These arrests are another scandalous proof that the Turkish authorities do not tolerate a free press. Adnan Bilen, Cemil Uğur, Şehriban Abi and Nazan Sala must immediately be released.”

“In situations of potential human rights violations,” said EFJ General Secretary Ricardo Gutiérrez, “the role of journalists as watchdogs of democracy is essential. The arrest of journalists who have just done their job in this context is particularly worrying. We demand their release but also complete clarity about the facts they were covering.”