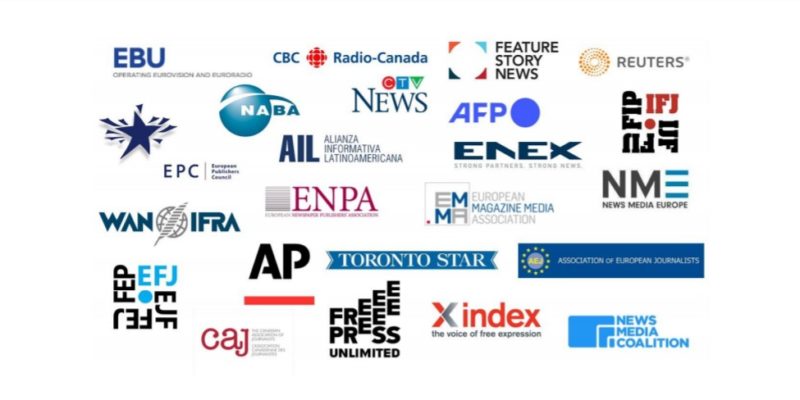 “To be clear, by these restrictions on the validity of visas, the Trump administration wants to make it much harder and more expensive for foreign journalists to work in the United States,” said EFJ General Secretary Ricardo Gutiérrez. “This is why, together with the IFJ and 22 global organisations, we have signed a joint appeal calling for the lifting of these provisions.”

This joint statement represents thousands of prominent and influential broadcast, print & online media outlets, news organizations and journalists’ associations that reach over a billion of people globally. We advocate our common view: that to enable us to continue our accurate and unbiased news reporting for a global audience, the US Department of Homeland Security must drop its proposal to reduce the length of I visas.

The EFJ General Secretary uploaded on Saturday the joint statement on the US Federal Register website on behalf of the European Federation of Journalists.

Here is the full statement with signatories:

A proposal to change the way the US manages visas for foreign journalists threatens to seriously jeopardise the exercise of journalistic freedom. We, the undersigned, urge the Department of Homeland Security to drop this proposal.

The “I visa” is required for all foreign journalists operating in the US, whether they are there for one week or five years. Once issued it is valid for up to five years, allowing journalists to work there continuously or travel in and out of the US for assignments. The proposal by the Department of Homeland Security to limit the visa to 240 days, with a possible extension of a maximum of 240 days, would seriously impact the work of the foreign media in covering the news in the US. Furthermore, the proposal is unclear about how the decision about a possible extension would be reached and what would happen after the extension period has elapsed.

Many foreign news organizations have a permanent presence in the US by sending correspondents there for a number of years (commonly 2-5 years). This period of time allows the individual journalists to better understand the country and therefore better report on it to the rest of the world. Restricting the time they could stay to a maximum duration of 480 days carries a substantial risk to how the US is represented globally.

Moreover, we do not agree that this proposal will achieve the ambitions stated: to encourage program compliance, reduce fraud and enhance national security. The I visa application process already requires the individual to name and be supported by the international media organization they work for and is only valid as long as they continue to work for that organization.

The First Amendment of the US Constitution is the backbone to its reputation for freedom of speech and of the press. This proposal is a serious threat to that and risks damaging the US’s reputation globally as a free and open democracy, as well as reducing the opportunity for the world to better understand the US.

We, the undersigned, remain firmly committed to delivering accurate and unbiased news reporting for a global audience. We therefore ask the US administration to continue to support a sustainable framework safeguarding media freedom.