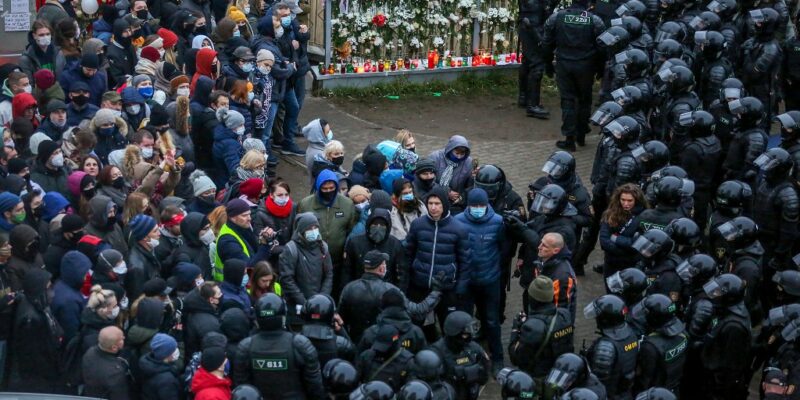 BAJ was singled out for its ongoing commitment to journalistic ethics and principles and its perseverance and self-sacrifice in the face of increased targeted crackdowns on media in Belarus.

The announcement was made jointly during this year’s Global Conference for Media Freedom, held virtually on November 16, 2020, and hosted by Canada and Botswana.

“It is vital that journalists, wherever they work in the world, can shine a light on what is going on, without fear of retaliation, censorship or punishment,” said Dominic Raab, Secretary of State for Foreign Affairs of the United Kingdom. “I pay tribute to the Belarusian Association of Journalists for their dedication to reporting human rights and electoral fraud in the face of violence, threats and intimidation. The work of those who defend media freedoms has never been more important.”

“At a time when media freedom is increasingly under attack, we commend the Belarusian Association of Journalists as it fights to protect the rights and freedoms, lives and livelihoods of media professionals in that country,” added François-Philippe Champagne, Canadian Minister of Foreign Affairs. “Its ongoing efforts to counter repression and disinformation ensure the voices of journalists and citizens are heard, and matter, when it counts the most.”

“It is a great honour for the Belarusian Association of Journalists to receive this award,” reacted Andrei Bastunets, Chairperson of BAJ. “We regard this award as a high appraisal of the work of our colleagues, who every day honestly cover events in Belarus, risking their freedom and health. Today, journalists in Belarus have to work under gunfire, literally, in a peaceful country. They are victims of police violence and are sentenced to long-term arrests for their work. We thank every voice in the world that speaks out for Belarusian journalists today! This is very important for our colleagues who remain imprisoned.”

In addition to this international event, the EFJ joined the appeal launched today by the National Union of Journalists of Ukraine (NUJU) and the Polish Journalists’ Association (SDP) to demand the immediate release of the 24 journalists currently detained in Belarus:

′′Don’t beat me! I am a journalist!” This is the title of the joint appeal launched today by SDP and NUJU. The joint appeal relays a series of detailed stories from Belarusian journalists about the circumstances of their brutal arrests. The Belarusian Association of Journalists (BAJ) has documented 360 arbitrary detentions of journalists who were just doing their job since the fraudulent presidential election on 9 August.

One of the witnesses cited by NUJU and SDP is BELSAT TV correspondent Catarina Andreeva. On Sunday 15 November, she was arrested in the course of her professional duties for covering demonstrations in Minsk.

“I am constantly advised to leave Belarus and take refuge in Poland or Lithuania, at least temporarily,” she said. “The question is: how long am I prepared to continue working in a situation where the space of freedom is shrinking by the hour? I don’t know, I don’t have an answer. But I am sure of one thing: there are people in Belarus who have been going out to demonstrate for four months with a white-red-white flag and flowers. That means we have to show them on Belsat”…

The EFJ joins SDP and NUJU in demanding the release of Catarina Andreeva and the 23 other journalists in detention in Belarus.