European Parliament stands up for journalists to defend democracy 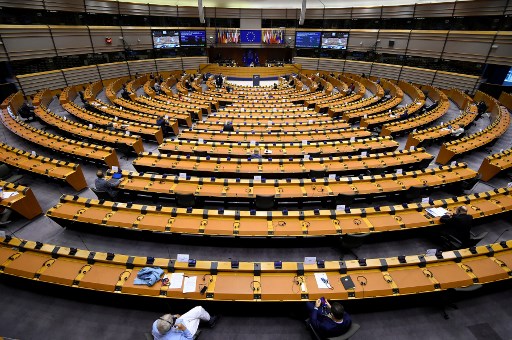 After Polish MEP Magdalena Adamowicz (EPP) presented a passionate call for the report on strengthening media freedom: the protection of journalists in Europe, hate speech, disinformation and the role of platforms in plenary, the European Parliament adopted today with a great majority the report, which was first drafted in February this year. The European Federation of Journalists (EFJ) has fully supported the draft and given its input throughout the process.

The own-initiative report focuses on six principal areas which are all intertwined: media freedom and pluralism, political independence of the media, the protection of journalists, financial and economic pressure, hate speech and disinformation. The report emphasises that combating media capture, hate speech and misinformation and supporting independent journalism is fundamental when it comes to defending the rule of law and democracy in the EU. Legal protections should ensure journalists’ personal safety. Also, the rapporteur reiterates the call on the Commission to propose an anti-SLAPP directive.

“This latest European Parliament report on media freedom and journalism is the right sign at a moment of unprecedented crisis and acceleration of attacks from all sides against journalists and media. The precariousness of the news landscape asks for a holistic approach helping journalists to be resilient and to have enough resources to regain trust among its readership, the citizens of the European Union and beyond” said Renate Schroeder, EFJ Director. “We now hope that the European Commission will respond with an ambitious European Democracy Action Plan, a Digital Service Act coercing platforms into long overdue responsibility on transparency and accountability and a Media Action Plan to sustain media pluralism and a vibrant press in Europe, in particular at local level.”

With reference to the Covid-19 pandemic, the report calls among other on the Commission and the Member States to urgently introduce EU and national emergency recovery packages to protect the jobs and livelihoods of journalists and media workers, support companies and fund public service media through the COVID-19 economic recovery plan, while fully respecting EU competition rules (…)”

Adamowicz applied for the establishment of a European permanent direct fund to support independent journalism as she stressed in her speech: “there must be money to defend our democracy when there is plenty of money to destroy it”. Such a permanent European fund for journalists should offer direct financial support for independent journalists and media outlets, freelancers and self-employed media workers. The report underlines that funding should be managed by independent organisations in order to avoid any interference with editorial decision-making and that support should be provided only for those public and commercial media outlets that are truly independent and free from government or any other interference. It is recalled that special emphasis should also be placed on independent media start-ups, particularly local ones.

Two years ago, on 3 May 2018, the Parliament adopted a resolution on Media pluralism and media freedom in the European Union, which was very similar in its content, noting the recent political developments in various Member States that have led to increased pressure on and threats against journalists, and recalling the crucial importance of media freedom, pluralism and independence. It called again on the EU institutions to guarantee full implementation of the EU Charter of Fundamental Rights as a means to thoroughly uphold media pluralism and media freedom.