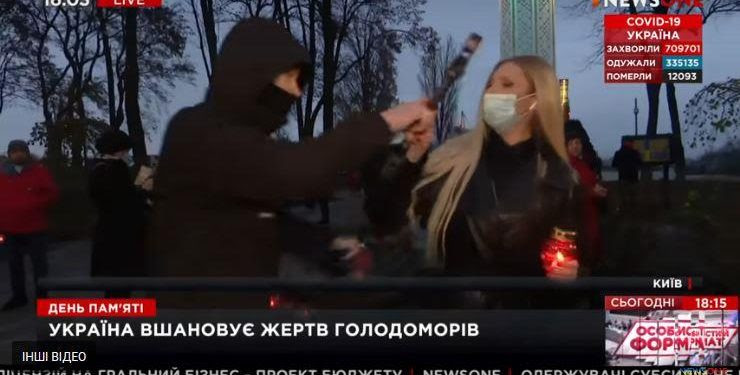 Screenshot of the moment where Ms. Tovkes is attacked. Credit: NewsOne

Ms. Tovkes, a reporter for the national TV channel NewsOne, was attacked in the middle of a broadcast in Kiyv during a ceremony honoring the Holodomor victims. This killing, which took place between 1932 and 1933 and left from three to 12 million deaths, is considered a criminal act of Stalin’s regime and genocide by several countries across the globe.

Despite the attack, where the man pushed and shouted at Tovkes after knocking her microphone and lamp out of her hands, she continued to broadcast live. She also recorded a video commentary about what happened and said that she was conducting her own investigation in order to catch the attacker.

In order to make progress with her inquiry, she watched a video of the attack, captured the attacker’s face, and identified an organization’s logo on his phone. However, she decided not to reveal its name at the moment.

According to NUJU’s own monitoring “Index of Physical Security of Journalists of Ukraine”, an act of physical aggression against journalists is recorded in Ukraine every 4-5 days.

Kyiv police launched a criminal investigation based on obstructing the legitimate professional activities of journalists. Law enforcement officers documented the incident, talked to witnesses and took videos from surveillance cameras.

NUJU launched in June an information campaign called “#Journalists are important”. The objective was to remind society of the importance and the hard work thousands of journalists are doing every day to keep citizens informed.

The union’s President Sergiy Tomilenko said: “The attack on a journalist during a live broadcast is outrageous. This is a consequence of total impunity for crimes against journalists. Ukrainian politicians are responsible for the high-level of aggression against journalists. Politicians try to divide Ukrainian journalists and media into “patriotic” (right) and “unpatriotic” (wrong), into “good” and “bad” media. Supporters of these people and radicals are beginning to follow this division and, in their view, promote “patriots” (or “good”) and harass “non-patriots”. There is a trend that some people see nothing wrong with interfering with the work, beating, harassing a so-called “bad” journalist. This incident is a clear example of this Ukrainian phenomenon which is very dangerous for the journalistic community.”

“The level of violence against journalists remains very high in Ukraine,” added Ricardo Gutiérrez, EFJ General Secretary. “This year, we have again registered 10 alerts related to Ukraine on the Council of Europe Platform for the Safety of Journalists, including cases of physical attacks and arson. The Ukrainian authorities must do everything possible to improve the protection of reporters, in partnership with journalists’ organisations.”

IFJ General Secretary, Anthony Bellanger, said: “We firmly condemn the attack against Violetta Tovkes and urgently call on Ukrainian authorities to conduct a swift investigation into this aggression and bring the attacker to justice. Media pluralism implies that all voices must be heard and we support our affiliate’s fight for media freedom. Journalists must be able to report free of fear and the government must ensure they work under safe conditions”.

NUJU has developed a special anti-crisis program to support the media. The program was developed by experts and representatives of more than 100 media and is based on the experience in other European countries.