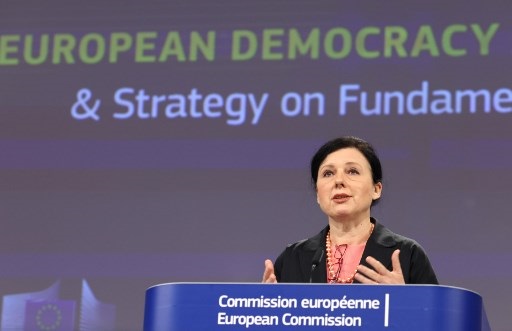 
Věra Jourová, Vice-President of the European Commission, presented today the European Democracy Action Plan to empower citizens and build more resilient democracies across the EU. The European Federation of Journalists (EFJ) welcomes the Action Plan and its concrete provisions to strengthen media freedom and pluralism, but calls for stronger regulation of Tech Giants, while protecting freedom of expression.

The Action Plan sets out measures to strengthen media freedom and counter disinformation in the European Union. More concretely, the Commission will recommend measures to promote safety of journalists and present an initiative to protect them from strategic lawsuits against public participation (SLAPPs). The Commission will also steer efforts to overhaul the existing Code of Practice on Disinformation, strengthening requirements for online platforms and introducing vigorous monitoring and oversight.

Vice-President for Values and Transparency, Věra Jourová, said: “Media are not only an economic sector, they are a pillar of democracy. The protection of journalists is a priority of the EU Democracy Action Plan. It goes hand in hand with the Media & Audiovisual Action Plan focusing on the recovery and digital transformation of these sectors.”

The Commission will also work closely with Member States, stakeholders and international organisations on structured dialogue and provide sustainable funding for projects on legal and practical assistance to journalists in the EU and elsewhere. Věra Jourová mentioned the “unacceptable attacks against journalists covering demonstrations in many member states”. She announced an EU initiative to enhance dialogue between media organisations and law enforcement authorities in order to better protect journalists on the ground.

The Action Plan proposes improving the existing EU’s toolbox for countering foreign interference, including new instruments that allow imposing costs on perpetrators. The Commission will steer efforts to overhaul the so-called Code of Practice on Disinformation into a co-regulatory framework of obligations and accountability of online platforms, in line with the upcoming Digital Services Act. To that end, the Commission will issue guidance to enhance the Code of Practice in spring 2021 and set up a more robust framework for monitoring its implementation. The EFJ agrees with the European Partnership for Democracy that a worrying element is the mention of “trustworthiness indicators” in algorithmic recommender systems – considering the ambiguity and subjectivity of trustworthy information – which requires some clarification.

Together with the European Trade Union Confederation (ETUC), the EFJ believes that the dominant market position of the digital giants, and business models that benefit from spreading content regardless of its veracity, seem unlikely to be disturbed by the EU Action Plan. However, the EFJ expects this issue to be tackled by the Digital Services Act to be published next week.

“The commitment of Věra Jourová and her cabinet to media freedom and democracy is to be commended,” said EFJ President Mogens Blicher Bjerregård. “I believe that the Action Plan largely takes into account the concerns of many trade unions, NGOs and civil society organisations. It is extremely important to have such a strong political approach to media freedom, including editorial freedom, security and pluralism. The EFJ therefore looks forward to the follow-up of the Democracy Action Plan and the Media Action Plan, likewise published today. The EFJ is ready to engage in concrete actions which help to support  journalists, local media and news start-ups.”

“We are delighted to see the commitment of the European Commission to make recommendations on ensuring the safety of journalists, in particular female journalists, and protect them from abusive lawsuits,” added Renate Schroeder, EFJ Director. “This action plan is long overdue and needs now the full support of member states and respective stake holders. Of course, we welcome the announced measures to support media pluralism, map options for dealing with media diversity and concentration, and strengthen transparency of media ownership and state advertising. While it is right to invest more in media literacy, more needs to be done to promote ethical and responsible journalism, in a context where technology giants are destructing the information market and flooding public debate with false information.  We suggest that the Commission should not only monitor and counter disinformation from foreign governments but also domestic disinformation spread by politicians, celebrities, and other prominent public figures.”

Next steps: The Commission will gradually implement the European Democracy Action plan until 2023 – a year ahead of the elections to the European Parliament. The EFJ together with other trade unions and civil society organisations, such as the ETUC and the European Partnership for Democracy,  will closely follow up, and when needed, put pressure on the European Commission to deliver what has been announced today.