Montenegro: The new government must prioritise and uphold press and media freedom 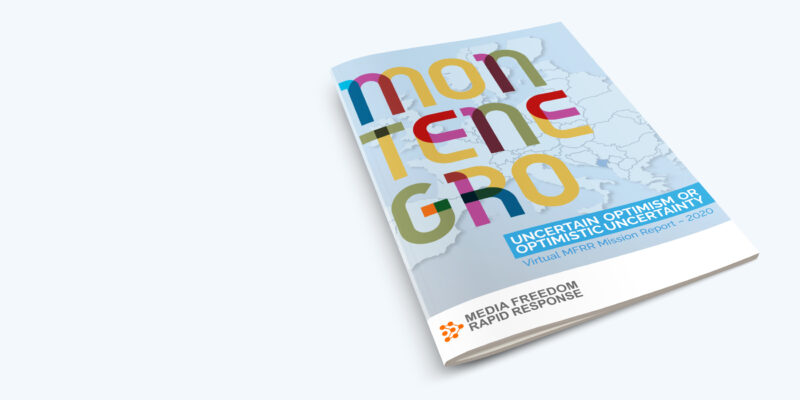 
As Montenegro’s new coalition government under the leadership of Prime Minister Zdravko Krivokapić was formally approved by the Montenegrin Parliament on 4 December, the Media Freedom Rapid Response (MFRR), the South East Europe Media Organisation (SEEMO) and key partners, urge it to put press and media freedom high on its agenda. The detailed report from their virtual fact-finding mission raises a number of concerns. To advance media freedom and, ultimately, the country’s accession bid to the European Union (EU), the new administration must commit to the necessary reforms for building and maintaining a free and pluralist media landscape.

This is a unique chance to make a break from the past after 31 unbroken years of Democratic Socialist (DPS) rule under Milo Đukanović’s leadership. The results from our virtual fact-finding mission by seven international civil society organisations that took place in September 2020, show decisive action is needed to establish a free and pluralist media landscape. Our findings are outlined and analysed in the mission report: Uncertain Optimism, or Optimistic Uncertainty: Virtual MFRR Mission Report published on 16 December.

“Our mission found a heavily polarised media landscape in the country, and it will take sustained and concerted efforts by Prime Minister Krivokapić and his government to improve protections for media freedom and the rule of law. They must therefore, in their political agenda, devote particular attention to addressing the myriad problems faced by journalists and media workers in Montenegro,” said Nik Williams, MFRR co-ordinator at European Centre for Press and Media Freedom (ECPMF).

A central tenet of the much-needed change of direction is the need to dismantle the entrenched polarisation that has defined Montenegrin politics, society and media for too long and ensure a free and fair playing field for every media outlet and actor to work safely. There are no quick fixes for the long list of issues that emerged throughout the series of interviews carried out with key stakeholders representing journalist unions, media outlets, NGOs, JUFREX (co-ordinated by the European Union and Council of Europe), the OSCE, the Commission for Monitoring Investigations of Attacks on Journalists and the Protector of Human Rights and Freedoms of Montenegro, which is the country’s National Human Rights Institution. Still, several actions can be identified that will be key to rebuilding trust and implementing sustainable reform. They include, among other pressing concerns, the following recommendations identified in the report:

To advance media freedom and the country’s EU accession bid, the new administration must commit to the necessary reforms for building and maintaining a free and pluralist media landscape. These must conform with European standards and include support for public interest reporting, transparent funding, shared regulatory standards and a safe working environment free from attacks and threats, embedded in a broader system that respects the rule of law, in theory and in practice.

The virtual mission was carried out as part of the Media Freedom Rapid Response (MFRR), which tracks, monitors and responds to violations of press and media freedom in EU Member States and Candidate Countries. This project provides legal and practical support, public advocacy and information to protect journalists and media workers. The MFRR is organised by a consortium led by the European Centre for Press and Media Freedom (ECPMF) including ARTICLE 19, the European Federation of Journalists (EFJ), Free Press Unlimited (FPU), the Institute for Applied Informatics at the University of Leipzig (InfAI), International Press Institute (IPI) and CCI/Osservatorio Balcani e Caucaso Transeuropa (OBCT). The project is co-funded by the European Commission.

The South East Europe Media Organisation (SEEMO) was also part of this mission.