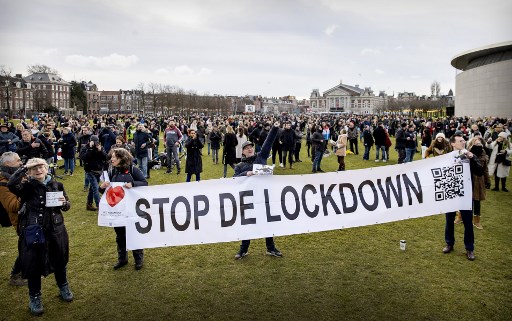 
Riots have taken place in several cities in the Netherlands following the the government’s decision to impose a 9pm curfew to curb the circulation of the coronavirus, on Saturday 23 January. Several journalists were physically attacked in a context of growing hostility towards the press. The European and International Federations of Journalists (EFJ/IFJ) join their affiliates in the Netherlands, the NVJ, in condemning the attacks and expressing alarm over the escalation of violence against media professionals since last year.

The unrest has started last weekend in protest against the curfew which came into force on Saturday. At least seven cases of violence against journalists and media workers have occurred in the last four days in Amsterdam, Eindhoven, Enschede, Helmond, Tilburg, The Hague, Haarlem. Journalists were insulted, assaulted and pelted with stones by individuals.

In addition, last Saturday, a man from Almere was arrested for posting a video threatening journalists who had reported on the recent riot on Museumplein in Amsterdam the week before. He advised public broadcaster NOS employees and journalists to ‘flee the Netherlands’ because something will be ‘done’ to them. On Saturday, a security guard who accompanied a NOS TV crew was pepper-sprayed by rioters on the face.

In response to the latest incidents, Thomas Bruning, general secretary of the Dutch Association of Journalists (NVJ), called on politicians to stress the important role of journalism.

“This is shocking. Aggression towards journalists is increasing from weekly to daily frequency, it is not normal for journalists to go out with security guards,” he added. He will consult editors to ensure journalists can continue to do their work safely.

EFJ General Secretary Ricardo Gutiérrez called on the authorities to do the utmost to protect journalists and investigate all attacks.

IFJ General Secretary Anthony Bellanger said: “Journalists’ safety is not guaranteed in the Netherlands at the moment and steps must be taken to resolve this immediately in the name of press freedom and journalists ‘ right to work without fear or threats.”

Just in one year, over 100 assaults against journalists were reported to the monitoring platform Persveilig launched by the Dutch Journalists’ Union (NJV), the Association of Editors-in-Chief, the Police and the Public Prosecution Service to help journalists who encounter violence or aggression in the course of their work.