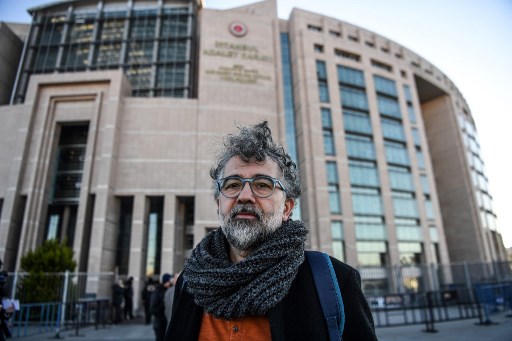 On the eve of the start of the trial of RSF’s Turkey representative, Erol Önderoğlu, who is facing a possible 14-year prison sentence, the European Federation of Journalists (EFJ) joined 16 press freedom and human rights NGOs in expressing support for this journalist and staunch defender of the right to inform in Turkey.

The below-named freedom of expression, human rights and journalists’ organisations denounce the judicial persecution of journalists in Turkey, and especially the journalist Erol Önderoğlu, who represents the press freedom watchdog Reporters without Borders (RSF) in the country. Erol faces a lengthy jail sentence for his work defending media pluralism.

Standing trial for having participated in the “Editors-in-Chief on Watch” campaign in solidarity with the closed Özgür Gündem newspaper in 2016, Erol Önderoğlu and his two co-defendants, the physician and human rights defender Şebnem Korur Fincancı and writer and journalist Ahmet Nesin, were originally acquitted after three years of persecution. However, on 3 November 2020, the 3rd Penal Chamber of the Court of Appeals of Istanbul reversed the ruling of acquittal given on 17 July 2019.

Consequently, on the 3rd of February, Mr. Önderoğlu and his co-defendants will once again be tried on charges of “propagandizing for a terrorist organization”, “openly inciting to commit crimes” and “praising the crime and the criminal”. They face these spurious charges solely for guest editing the aforementioned newspaper, which was forcibly closed in 2016 in the media crackdown following the attempted coup. Together, they face up to 14 and a half years in prison, under the Anti-Terror Law No. 3713 and the Penal Code of Turkey.

The retrial of this tireless free speech advocate is a dreadful illustration of the witch-hunt waged by President Erdoğan’s government against its media critics. Currently, Turkey is Europe’s biggest jailer of professional journalists, and the few remaining independent media outlets are continuously harassed and marginalized, while detained journalists and closed media are denied any effective legal recourse.

We denounce the ongoing detention and prosecution of journalists in Turkey as an autocratic attempt to silence all dissenting voices and to prevent independent journalists from carrying out their profession.

We offer our support and solidarity to our colleague Erol Önderoğlu who has been prosecuted for the past four years in Turkey, and we call on the Turkish government to drop the charges against Erol Önderoğlu and his two co-defendants, Şebnem Korur Fincancı and Ahmet Nesin, and cease such oppression of journalists, academics and writers.

🔴 On the eve of the start of the trial of RSF’s Turkey representative, @ErolOnderoglu, who is facing a possible 14-year prison sentence, many press freedom and human rights NGOs are supporting this journalist and staunch defender of the right to inform in #Turkey.#SupportErol pic.twitter.com/Z0CyQcUx7g