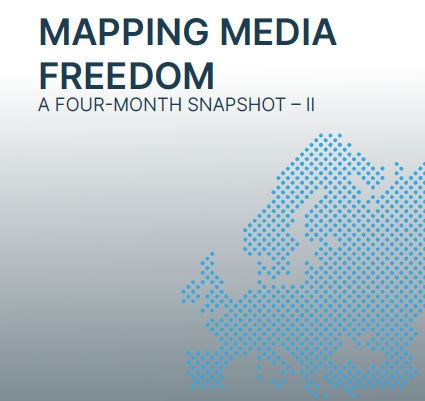 
From July to October 2020, attacks on media freedom in Europe took many forms, as the Media Freedom Rapid Response’s second monitoring report documents. Besides anti-lockdown demonstrations and online harassment, the impact of legal actions (SLAPPs) contributed to a hostile climate for journalists and media workers. Find all the details in the second MFRR-report.

The four-month snapshot of media threats in EU member states and Candidate countries was produced by the Media Freedom Rapid Response partners, European Federation of Journalists (EFJ) and International Press Institute (IPI), with support from the European Centre for Press and Media Freedom (ECPMF). The 114 alerts that were registered between July and October 2020 on the Mapping Media Freedom platform provided the basis for this second report. It follows on from the previous report that covered the period from March to June 2020 and presents an overall picture of the health of the media environment in EU Member States and Candidate Countries, country-specific analysis and thematic analysis that interrogate trends affecting media freedom across the region.

As the reporting period remained under the cloud of the pandemic, anti-media sentiments also continued to affect journalists covering anti-lockdown demonstrations. Out of 24 alerts related to COVID-19, 15 took place during protests held in Germany, Italy and Serbia. These alerts emanate broadly from two sources: private individuals taking part in or observing the protest or from police officers or representatives of security services deployed to maintain order during the protest. In these countries, the report also highlights an escalation of risk from threats and harassment to physical violence, which led to journalists requiring medical attention.

In general, the most common contexts in which journalists and media workers faced threats were public places and streets (33), followed by demonstrations (31) and online/digital (24). As part of a growing trend of anti-media rhetoric, reinforced by increased polarisation that demonises media workers, harassment is increasingly common. This includes a worrying trend of sexual violence directed at women.

Another continuing danger to media freedom is the use of Strategic Lawsuits against Public Participation (SLAPPs) and other abusive legal actions. Within the monitored period, Polish media outlets Gazeta Wyborcza and OKO.press were sued several times by influential organisations and individuals, some linked to the ruling Law and Justice party (PIS) to undermine critical journalism. It is the goal of MFRR partners to document and analyse these cases while working jointly with local journalist associations and other key partners. Additionally, MFRR provides legal support and advocacy to support outlets targeted with legal action. Further to this, as part of a broad civil society coalition, the MFRR advocates for the adoption of an EU anti-SLAPP Directive in order to establish harmonised EU-wide minimum standards of protection, including appropriate procedural safeguards, supportive and protective measures for targets, as well as deterrent and awareness-raising provisions.

The Media Freedom Rapid Response (MFRR) was launched in March 2020 to support at-risk journalists and media workers across EU Member States and Candidate Countries. Mapping Media Freedom is a platform that enables anyone to upload details of an attack, threat or media freedom violation and help to visualise and collect information about media freedom across Europe. The European Federation of Journalists (EFJ) and the International Press Institute (IPI), with support from ECPMF form the expert network that verifies, analyses and publishes all alerts on the platform. These alerts form the basis of this Monitoring Report.