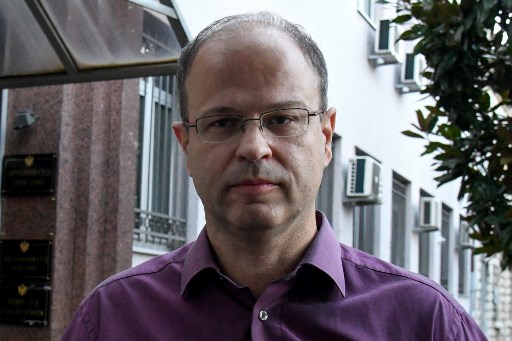 
In a statement published today, leading international press freedom and journalists’ organisations, Including EFJ and IFJ, condemn the continued judicial persecution of Montenegrin investigative journalist, Jovo Martinović after his appeal was rejected.

Leading press freedom and journalists’ organisations, including Media Freedom Rapid Response (MFRR) partners, strongly condemn the decision by the Court of Appeals to reject Jovo Martinović’s appeal and uphold the first instance verdict of the High Court in Podgorica which convicted Martinović to 12 months of prison. While he will not be imprisoned due to time already spent behind bars, Jovo Martinović will have a criminal record, solely due to his journalism. The undersigned organisations condemn the verdict and regret that the Court of Appeals has not seized the opportunity to acquit the internationally awarded journalist and send a message of support to investigative journalism in Montenegro.

Martinović was convicted for violating the Criminal Code of Montenegro relating to the creation of a criminal organisation, as well as illicit production, possession and distribution of narcotics. While he did set up a meeting with defendants over the filming of smuggled weapons in France, he did so for journalistic purposes. We believe that throughout the detention and subsequent trial, his rights to a fair trial have been violated. Prior to his arrest on 22 October 2015, Martinović had already been held in custody for almost 15 months before being finally freed, provisionally.

A retrial formally began on 2 December 2019 and on 8 October 2020, the High Court of Montenegro sentenced Martinović to one year in prison for participating in drug trafficking. He was acquitted on charges for membership in a criminal organization. Yesterday, while Martinović’s appeal was rejected, an appeal brought by the state calling for these charges to be reinstated was also rejected. This offers little solace either to Jovo Martinović or other investigative journalists who can read the ongoing judicial persecution as an attempt to dissuade and chill reporting of corruption and organised crime in Montenegro. Investigative journalism is not a crime and should not be treated as such by the Montenegrin authorities.

In 2019, the Court of Appeals returned the case against Jovo for a retrial precisely due to lack of evidence against the journalist. The undersigned organisations highlight the continued absence of evidence that would justify a conviction. This further highlights a fundamental flaw in yesterday’s verdict. While Jovo Martinović will not be imprisoned, this politically motivated judicial persecution is an attack on investigative journalism and a damning indictment of media freedom in Montenegro.

There remain few precedents for this level of judicial persecution aimed at an investigative journalist in the Balkans and Europe more broadly and highlights a significant failure for the rule of law, which remains important as Montenegro is seeking ascension to the European Union. In a 2020 report, the European Commission, highlighted that while there are legal guarantees in place to protect judicial independence, the system is still “vulnerable to political interference”. To ensure this situation does not continue and to build trust in the judicial system, these guarantees need to be strengthened as a priority.

The undersigned organisations condemn the Court of Appeals’ verdict and stand in solidarity with Jovo Martinović and all investigative journalists in Montenegro. We call on Montenegrin authorities and courts to work in line with their commitment to media freedom and European standards, as part of their commitment to the ascension process for the European Union, to ensure Martinović is not further criminalised or persecuted for his journalism.