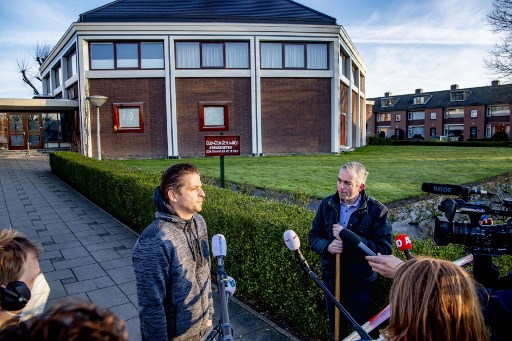 On Sunday 28 March, several journalists were reporting from churches in the towns of Krimpen aan den Ijssel and Urk about the gathering of hundreds of churchgoers despite strict anti-coronavirus regulations. Hostile and aggressive behaviour from individual churchgoers, sometimes leading to physical violence, soon followed and made it very difficult for journalists to continue their reporting.

In Krimpen, Jacco van Giessen, a reporter for RTV Rijnmond was kicked in the stomach while interviewing someone in front of a reformed church.

In Urk, Powned journalist Mark Baanders was assaulted and deliberately hit by a car while parking. The journalist managed to jump away from the wheels to escape further injury. Earlier the same day, Baanders had been physically assaulted by two young people.

According to media reports, the atmosphere around the Sion Church in Urk was generally very hostile towards the press. While services were in progress, car and scooter drivers were yelling to the press “go home, man”, De Telegraaf reported. In addition, the car of a reporter from regional newspaper De Stentor was smeared with eggs.

Dutch Journalists’ Union NVJ General Secretary Thomas Bruning said it was “a sad weekend for freedom of speech and expression” and qualified the police reaction as very “disappointing”. The deliberate non intervention of police forces present on the ground in order “to prevent escalation” was denounced by the journalists’ organisations as it left journalists with no protection. They requested a meeting with the police and the public prosecution service to discuss the recent incidents.

Since 1 January 2021, the monitoring platform PersVeilig – launched by the NVJ, the Association of editors-in-chief, the Police and the Public Prosecution Service – has already recorded 73 threats or aggression towards journalists and media workers. In the whole of 2020, the platform recorded a total of 120 cases, so the first three months of 2021 represents a significant and worrying trend that does not appear to be slowing.

The Media Freedom Rapid Response partners are deeply concerned by the rising number of threats and acts of violence against journalists and media workers in the Netherlands and call on the authorities to increase protection measures. Press and media freedom must be fully guaranteed to ensure the citizens’ right to information, which will only be possible when journalists feel safe at work.