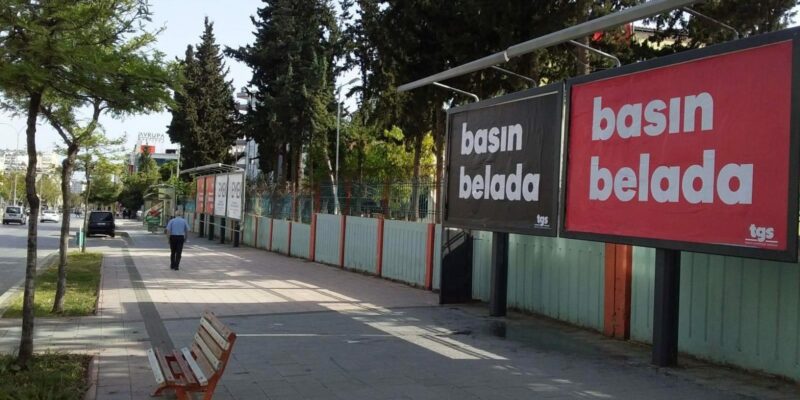 To mark World Press Freedom Day 2021, the Journalists’ Union of Turkey (TGS) launched a new campaign that attracted a lot of attention and published the TGS Press Freedom report on the precarious situation of Turkish journalists.

The TGS mass campaign, entitled #BasınBelada, could be translated to #PressinTrouble and is a play on the lyrics of a popular song by artist Ahmet Kaya, named “Başım Belada” (“I am in trouble”). Next to the #BasınBelada campaign running on social media and newspaper ads, dozens of Turkish journalists shared the visuals and over 200 billboards can be spotted in Istanbul, Izmir, Diyarbakir, Bursa, Adana, and Mersin.

This campaign aims to draw attention to the difficulties Turkish journalists are facing. For years they have been censored, dismissed and jailed, and as a result the society is deprived of its right to receive information. “The intense attention that our campaign attracted is the result of the current state of media freedoms in Turkey. Everyone knows that the press is in trouble. We should understand that when the press is in trouble, the whole society has trouble. If the media is not free, there is no democracy,” said Mustafa Kuleli, TGS General Secretary.

Renate Schroeder, Director at the EFJ, said: “We are proud of the struggle of our Turkish colleagues. We are less proud of the attitude of the European Union, which on 27 April signed a new financing agreement with Turkish President Recep Tayyip Erdoğan. EU leaders, once again, are turning a blind eye to human rights and media freedom violations in exchange for Turkey’s efforts to keep refugees in its territory.”

On the same day, 3 May, TGS also announced the publication of its Press Freedom report 2021. Covering the period from April 2020 to April 2021, it documents and reveals the extent of censorship, arrests, convictions, physical assaults and judicial harassment against Turkish journalists and the high unemployment rate of journalists, which is about 35-40%.

The report points out that 43 journalists are currently imprisoned in Turkey for their professional work and many have been experiencing human rights violations disguised under Covid-19 restrictions: they are forbidden to communicate with their families, receive mail and to access health services. The most common charges against journalists are “membership to an armed organization” and “conducting propaganda for a terrorist organization”.

In the last year, Turkish prosecution sentenced journalists to a total of 226 years, eight months and 25 days in prison, according to the report. Turkey’s Radio and Television Supreme Council (RTÜK) issued a total of 7,488,851 Turkish Liras in monetary fines and ruled for 41 broadcast arrests. A total of 274 journalists were tried and 44 were physically assaulted.

With regard to their union rights, it was found that many media employers still do not want their media workers to unionise, with about 1,400 media workers being “deprived of their trade union rights because of the employers”. However, as the pandemic has made  journalists’ working conditions worse, more journalists have unionised in the past year to defend their collective rights, for instance to get priority vaccinations. The TGS’s twelve-point list of recommendations for fair remote working remains the only guideline of its kind.

The main findings can be accessed here and the full report here.