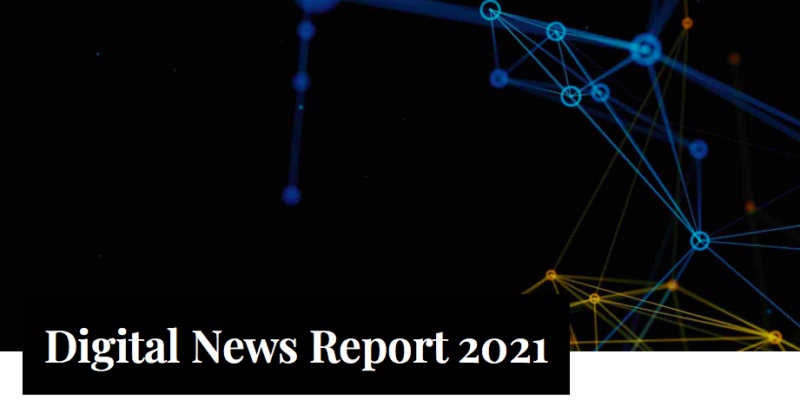 On 23 June 2021, the Reuters Digital News Report 2021 was published by the Reuters Institute for Journalism in cooperation with Oxford University. Apanel of experts discussed the findings for its launch. The most encouraging result of this extensive study is that the public’s trust levels have sharply risen during the Covid-19 pandemic. Now, major challenges are how to build on the trust gained and to further engage high audiences.

In the panel discussion, it appeared that major questions defining the future of news consumption concern how media can hold and engage subscribers, especially regarding young audiences:

“It’s important to hire younger reporters, engage young audiences and be present on social media. But more broadly speaking, you are not going to be accepted by today’s audiences if you don’t have a more diverse newsroom”, said Roula Khalaf from the Financial Times.

“Concentrating on young audiences is important for democracy because if the younger generation is concentrated on conspiracy theories, it’s a problem for all democracies”, said Alexandra Föderl-Schmid from Süddeutsche Zeitung.

The report is the most comprehensive piece of research on news consumption worldwide, based on more than 92,000 interviews and covering 46 countries from across the world. It examines how COVID-19 is transforming the news industry, how audiences think about impartiality and the rise of more visual social networks like TikTok and Instagram. It also explores the rise of reader revenue models, the role of trust and misinformation, and the way female, younger and more partisan audiences perceive how the news media cover them.

Here are some of the most interesting findings for the European journalists’ community:

Trust in news
The overall trust in the news has increased by six percentage points during the pandemic, thereby reversing the previous decline, especially in Western Europe and for media outlets with a reputation of reliable reporting. Finland is the highest with 65% trust. In countries with strong and independent public service media, greater consumption of trusted news brands was observed. A clear majority of people across countries believe news outlets should reflect a range of views and let them decide what to think.

Paying for news
The number of users willing to pay for news remains low, with the most successful countries being Norway, where 45% are paying for online news via subscription, donation or one-off payment. In the Netherlands, this number reaches 17% and only 9% in Germany. Also, in most countries, a few national brands dominate, following a “winner takes most” dynamic. Such slow or uneven progress poses a major problem to media outlets aiming to survive in the digital world.

Printed news
The pandemic has further deteriorated the situation for print publications, partly due to restrictions on movement and also due to the hit to related advertising revenue, thereby accelerating the shift towards a mostly digital future. Countries with traditionally high levels of circulation, such as Germany, Austria, and Switzerland, have seen some of the biggest falls.

Misinformation
In Europe, 54% of respondents showed concern about the spread of misinformation. False information about Covid-19, in particular, is widespread in Central and Eastern Europe (Czech Republic, Slovakia, Hungary, Romania, and Bulgaria). With an overall 29%, the behaviour of politicians was found to be of the greatest concern regarding Covid misinformation, with numbers in Poland or Spain being even higher.

Perception of unfair coverage
It was further found that political inclining is an influential factor on whether people think news coverage is fair: Partisan audiences in many countries think the news media cover them unfairly, especially right-leaning audiences in Spain or Germany. In many countries, it emerged that next to women and ethnic minorities, younger age groups feel least fairly represented by the media and that there is also too little coverage of issues they care about.

Young people and social platforms
Young people prefer to access news via social media and search rather than going to a news website. This makes it harder for mainstream media to build direct relationships with young people. They are using more YouTube, Snapchat, Instagram and now TikTok. Tiktok is used by a third of those aged 18-24 and these platforms have been at the heart of political protests. Journalists do play a significant role on Twitter and Facebook, but on Instagram and TikTok it is rather influencers and celebrities.

The full report can be read here and the key findings here.

Federica Cherubini, Head of Leadership Development at Reuters Institute for the Study of Journalism, in a recentwebinar on trust in media organised by the EFJ, also pointed to the need for journalists to adapt to these changing ways to consume news and emphasised the importance of receiving training. Here is herpresentationon the skills needed in this evolving digital environment.