Belarus : International solidarity with Belarusian journalists as the crackdown against critical voices continues 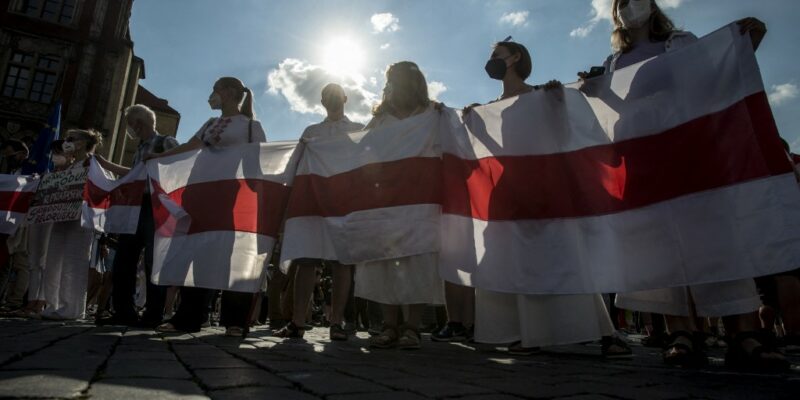 On 30 June, detained journalist Andrej Aliaksandraŭ was charged with high treason. If convicted, he could face up to 15 years in prison. Aliaksandraŭ, who has been in custody since January, was previously charged with “organising and preparing actions grossly disturbing public order”. Those charges were based on allegations that he helped pay the fines of journalists and protesters who were detained in last year’s anti-Lukashenko demonstrations.

On 2 July, freelance journalist Andrei Tolchyn was convicted for violating Art. 23.5 (illegal production and distribution of media products) while filming near the pre-trial detention center before the trial of political prisoners Mikola Statkevich, Siarhei Tikhanouski, Dzmitry Popov, Artsyom Sakau, Ihar Losik and Uladzimir Tsyhanovich, when unknown people threw him into a van and injured his leg. The journalist was found guilty and punished with a fine of 870 rubles. The court also ruled to confiscate his journalistic equipment.

On 3 July, sports journalist for Tribuna.com and soccer player Aliaksandr Ivulin was suspected of organising or participating in actions that seriously violate public order. No further information on the alleged crime is currently being released, and it is not known which of his articles is involved. Ivulin is the author of the most popular video blog about Belarusian football. He has been transferred to a pre-trial detention centre. If convicted, he faces up to three years in prison. Ivulin and his video editor Yaroslav Pisarenko were respectively sentenced in early June to 30 days and 15 days in prison allegedly because they had hung a white-red-white flag in the window (symbolising the resistance), which they deny. Ivulin was to be released on 3 July 2021.

On 5 July, Belarusian authorities closed down the bureau of Euroradio, an international radio station that provided independent information.

On 6 July, Raman Vasyukovich, who works for the international TV channel Nastoyaschego Vremya, was fined 870 rubles for “violating the order of production and distribution of media products” because of his report on 25 May. This article is used against journalists who have not obtained accreditation from the Belarusian Ministry of Foreign Affairs or who have prepared material for foreign media. Vasyukovich faces an administrative sanction.

Last night, Aleh Suprunyuk, the editor of the “First Region” 1reg.by news site was taken into custody. He is accused of making and distributing extremist materials (Article 19.11 of the Administrative Code). Suprunyuk is the former chairman of the Brest branch of the Belarusian Association of Journalists and faces a huge fine or administrative arrest.

On 8 July, Jahor Marcinovič, editor-in-chief of one of the oldest weekly in Belarus Naša Niva, was arrested. Belarussian authorities also blocked access to the Naša Niva website and conducted raids. On the same day, they arrested Igor Kazmerchak, editor for the website http://orsha.eu.

To date, 25 journalists and media workers in Belarus are subject to criminal proceedings.

EFJ director Renate Schroeder said: “We call again on the European governments to intensify pressure and take action in the face of constant violations of human rights and press freedom in Belarus. We stand in solidarity with all the Belarusian journalists who are under terrific pressure. We won’t let you down”.